Diploma in Prevention of Air Pollution by Ships 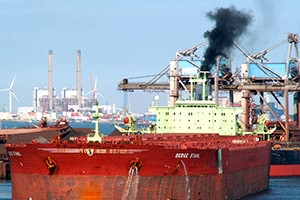 Learn about regulations and methods aimed at preventing air pollution from ships and tankers in this free online course.

Publisher: ADU
Air pollution is any pollutant found in the atmosphere that can damage or harm any living creature or the environment in which they live. This diploma course explores the prevention of air pollution due to ships in the marine environment. The law of the sea, air pollutants, the protocols of the annexes put together to curb the pollution and the Clean Air Act are all covered in this course. Register for this course today!
Start Course Now

We are all responsible for our marine life and we must protect all forms of pollution from damaging this fragile ecosystem. Pollution can cause serious harm to or even kill the plants and animals in the sea. International regulations place strict laws on ships to help protect the marine environment. When we burn fossil fuels, we don’t only pollute the air but also the oceans. Today, the seas absorb as much as a quarter of all carbon emissions caused by humanity, which changes the pH of surface waters and leads to acidification. So what happens when the ocean’s chemistry is disturbed? We badly damage this marine life and the coastal economies that depend on them. The ocean’s carbonate levels decrease when acidity levels rise, thus threatening the survival of these animals. More acidic waters also contribute to the bleaching of coral reefs, thus making it harder for some types of fish to sense predators and others to hunt prey. The International Convention for the Prevention of Pollution from Ships (MARPOL) Annex VI sets a limit on sulphur oxide and nitrogen oxide emissions from ship exhausts. It also prohibits the deliberate emissions of ozone-depleting substances. The Annex includes a global cap of 4.5% m/m on the sulphur content of fuel oil and calls on IMO to monitor the worldwide average sulphur content of fuels.

This course analyses the effects of such emissions that harm human health and our environment. Investigate the adoption of the MARPOL Annex VI that followed some years of debate within the IMO organisations. As mentioned, this is an approved Technical Code on the Control of Emissions of Nitrogen Oxides from marine diesel engines. You will then study the designated emission control areas that set more stringent standards for particulate matter. Examine the MARPOL Annex VI, which regulates shipboard incineration and the emissions of volatile organic compounds (VOC) from tankers. MARPOL ANNEX VI applies to all ships, fixed and floating drilling rigs and other platforms, but the certification requirements depend on the size of the vessel and when it was constructed. This course illustrates how ships of 400 gross tonnes and above engaged in international voyages involving countries that have ratified the conventions, or vessels flying the flag of those countries, must have an International Air Pollution Prevention Certificate (IAPP Certificate). Understand how the issued IAPP certificate follows an initial survey carried out by the Flag Administration. Recognised organisations (like the Det Norske Veritas, American Bureau of Shipping, Lloyd's Register and so on) can issue certificates on behalf of the Flag Administration, confirming compliance with MARPOL Annex VI.

This course aims to discuss the rights and responsibilities of nations concerning the use of the world's oceans, establishing guidelines for businesses, the environment and the management of marine natural resources. By taking this course, you will study the principal conventions formed to curb marine pollution and regulate the use of the world's oceans by individual states. First, scrutinise the definitions, applications, port state control and reports contained in the articles and protocols of the MARPOL. Next, learn about the concepts, applications, exemptions and regulations for preventing air pollution from ships. Inspect the applicability, emission standards and other provisions of the EPA evolution of nonroad diesel engine regulations and the US enforcements on emissions. Lastly, learn about the regulated standards of MARPOL Annex VI fuel on oil sulphur and the content, places and time to file a fuel oil non-availability report. This course will be of significant interest to students, researchers, marine engineers, environmentalists and anyone focused on protecting the marine environment by limiting air pollution from ships’ activities. Register for this course today and begin your next learning experience!

Diploma in Prevention of Air Pollution by Ships - First Assessment

Diploma in Prevention of Air Pollution by Ships - Second Assessment