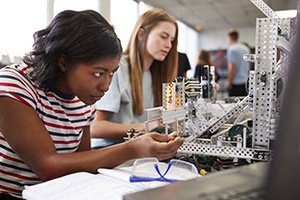 Learn how to use derivatives to find the instantaneous rates of change of any function in this free online course.

Publisher: Graham Van Brunt
Have you ever wonder how changes in physical processes are measured or predicted over time? This course will give you knowledge of engineering calculus and how it is used to calculate instantaneous rates of change of any given function. You will learn how to represent a function on a graph to find its slope or derivative. Also, you will be taught how to find derivatives of different trigonometric, algebraic, logarithmic and exponential functions.
Start Course Now

Physical quantities such as electric current, magnetic flux and the velocity of a moving object are not constant; instead, they keep on changing with time. Derivatives are means for finding the rates of change in physical quantities over time. This course starts off by talking about differential calculus, the founders of differential calculus and how the concept of instantaneous rate of change applies to distance, speed, magnetics flux and current. A function is a special relationship where each input has a single output. You will be shown how to represent a physical quantity using a function in an equation. Rene Descartes invented a two-dimensional plane and applied algebra to it. In this light, you will learn how to use this 2D plane, also called the Cartesian plane, to plot algebraic and trigonometric functions and represent relationships between various functions. Calculus is based on the concept of limits as they determine the behavior of a function. Learners will be taught different properties of functions and how to find the output of a function when the limit approaches a certain value.

A function is said to be continuous if it satisfies all the values in an interval. You will acquire knowledge to find the continuity of a function and determine the point where a function is discontinuous. The fundamental question of calculus is about finding the instantaneous rate of change of a function. Since the velocity of an object is not constant and it changes over time, you will learn how to find the derivative of the function over a particular instant called the instantaneous rate of change. Learners will be shown how to represent a function on a graph using the independent and the dependent variables to calculate the slope of the function at any point on the graph. Learners will be taught how to calculate the output of a function when it is squeezed to a point from both the upper and lower limits with the help of the Squeeze theorem. At the end of this course, you will learn how to prove trigonometric identities of sin(x) and cos(x) as well as how to find the derivatives of common trigonometric, exponential and algebraic functions.

This course is designed for learners who are new to the field of derivatives and for the professionals who studied calculus at school and want to get a quick review of the subject for their jobs. This course is not just about dry and tedious mathematical calculations and formulae. On the contrary, it presents the concept of derivatives in an interesting way with the help of colorful graphs and diagrams to maintain the interest of the learners and maximize learning. The use of derivatives is not limited to the fields of mathematics and physics. Derivatives find applications in the areas of medical science, weather forecasting, computer science, electrical engineering, machine learning and many more. Keeping in mind such diverse applications of derivatives, it is essential for people in the fields of science and technology to equip themselves with the knowledge of derivatives. So, don’t miss out on the opportunity to gain an understanding of derivatives for your academic and professional life. Enroll now!

How to Find Derivatives