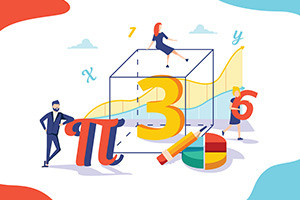 Publisher: ADU
CLEP College Mathematics: Real & Complex Numbers And Basic Algebra is a free online course that deals with imaginary numbers that come from taking the square root of negative numbers. This course introduces you to basic algebraic operations; linear and quadratic equations. You will learn how to solve inequalities, and graphs. It uncovers the method of substituting the logarithmic expressions and also solving quadratic equations. Register Now!
Start Course Now

Mathematics is an exciting and varied degree that can open up a lot of opportunities for students. The basic arithmetic operations for real numbers are addition, subtraction, multiplication, and division. Addition is the most basic operation of arithmetic. In its simplest form, addition combines two quantities into a single quantity or sum. CLEP College Mathematics: Real & Complex Numbers And Basic Algebra is a free online course about Real numbers, rational and irrational numbers. You will learn about sets of numbers and their operations. It outlines the methods used to calculate the sum, difference, product, and quotient of negative whole numbers. This topic teaches you the steps in converting rational numbers from and to decimals. In Mathematics, we usually deal with two types of quantities-Variable quantities (or variables) and Constant quantities (or constants). In this course, you will discover the different types of variation according to the pattern of changing or relationships of variables. Other names for exponents are index or power, this course will explain how to solve exponents and power in maths.

A monomial is an algebraic expression that contains only one term. A monomial can be a constant Real number, a variable, or an expression written as the product of a Real number and variables. In this course, you will be introduced to the basic rules of Exponentiation. Learn how to calculate the power of power as well as the quotient rule for monomials. Equations in which a variable expression is raised to a rational exponent can be solved by raising both sides of the equation to the reciprocal of the exponent. The reason the expression is raised to the reciprocal of its exponent is that the product of a number and its reciprocal is one. This course explains how to solve an equation with rational exponents. Learn how to solve radical equations having one radical term. It discusses the relationship between logarithms and exponents. This course uncovers the algebraic rules for multiplication of two binomials using the acronym "FOIL":

Finally, there are many real-world situations that deal with quadratics and parabolas. Throwing a ball, shooting a cannon, diving from a platform, and hitting a golf ball are all examples of situations that can be modeled by quadratic functions. This course examines the graphical solution of quadratic equations in more detail as well as other methods of solving quadratic equations. This course outlines the properties of inequalities, solving inequalities using addition and subtraction. Learn how to solve inequalities using multiplication and division. You will discover imaginary numbers, their properties, and the powers of i. This course analyzes complex numbers and their properties basics. You will learn the method of completing the square to establish a general formula for solving any quadratic equation. This course will be of significant interest to everyone. Ranging from college students to anyone who wishes to learn the basics of mathematics. You might not become excellent or exceptional, but all humans with a standard intelligence can be good. It's mainly understanding the rules and practice. Register and Get Started Now!

Sets of Numbers And Their Operations