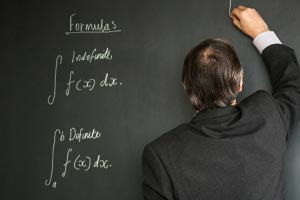 Publisher: ADU
This introductory college-level course gives you a broad understanding of the terms, formulas and problem-solving in calculus. Calculus is a versatile and valuable tool. It is deeply integrated into every branch of the physical sciences and other career paths. This course teaches you about definite and indefinite integrals, antidifferentiation as well as how to apply derivatives in your daily activities.
Start Course Now

This course has been specially put together to take you through various concepts in calculus. It covers the higher-order derivatives (the derivative of the derivative!) and specifies the test for the second derivative to determine whether a critical value represents a maximum or a minimum point. It illustrates how to derive the derivatives of the inverse trigonometric functions and identify the restrictions that need to be placed on each inverse to make them functions. The focus is on definite and indefinite integrals: definitions and some basic integral rules as well as how to compute a definite integral will be highlighted. A common practical application of the derivative is as the measurement of the rate of change. It can also be used to measure the speed at which a quantity increases or how fast it decreases.

In most cases, the difficult part of an optimization problem is the translation from a written to a mathematical description of the problem. You should be able to perform this translation quickly and effectively upon completion of this course. In seeking the extrema of a function, we must consider the possibility that points that are not endpoints, but where the derivative fails to exist, could also represent extreme values. Exponential and logarithmic functions occur frequently in mathematical models for economics, social science, as well as in natural sciences. For example, exponential plays an important role in modelling population growth and the decay of radioactive materials. A good understanding of these functions is essential for all fields that use mathematical models. In this course, you will learn about the derivatives of exponential and logarithmic functions. In calculus, base e is king! It simplifies differentiating and integrating. However, there are times when we need to differentiate logarithmic functions to other bases.

Furthermore, how can we use a Riemann sum to estimate the area between a given curve and the horizontal axis over a particular interval? We cover in detail the Riemann sum, trapezoids approximation method, sigma notations and its formulas. Finding the antiderivative of a function or integrating, is the opposite of differentiation - they undo each other. Similar to how multiplication is the opposite of division. Sometimes while solving mathematical problems, some sums are tricky. The number of terms can vary, such as ‘the sum of the first odd numbers’. This involves a bit more thought than the sum of the first 20 odd numbers. How do we represent an odd number? You will learn how to solve the variable number of terms, apply the three-sigma laws and the formulas for the sums of sequence. If you are an engineer, economist, computer scientist, researcher, or a student with an interest in an excellent working knowledge of calculus AP, sign up today.

Graph of Functions and Derivatives

Extrema and Application of Derivatives