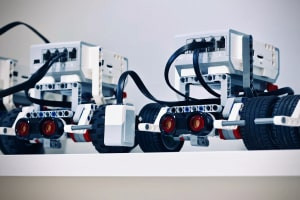 Discover the uses of robots and how they are classified, laws of robotics and more in this free online diploma course.

Publisher: NPTEL
This free online diploma course in robotics unravels the fundamentals of this field, starting with its history before moving onto the various applications and laws of robotics. You will enhance your understanding of both forward kinematics and inverse kinematics in animation and gain knowledge of ‘manipulators’, a key part of industrial robots. You will also learn about DH algorithms, along with differential relations.
Start Course Now

This diploma course covers the main themes in robotics, starting with the basics such as its origins. After this, kinematics and the Diffie-Hellman (DH) algorithm are unravelled, along with important differential relations. Although its roots go back to the fourteen or fifteen century, robotics is a relatively new science, engineering discipline or industrial technology that is often misrepresented in the popular media. You will learn that the history of modern robotics can be traced back to 1495 when Leonardo da Vinci designed a mechanical device that looked like an armoured knight. Later, Czech playwright Karel Capec introduced the word ‘robot’ from the Czech word, ‘robota’, meaning ‘tedious labour’. Then move onto to study the basic laws that regulate robotics, such the Zeroth law, which says that a robot may not injure humanity or, through inaction, allow humanity to come to harm. Industrial robots (manipulators), fields and service robots (humanoids, medical robots and walking robots), and entertainment and educational robots are the three main categories that you will explore next.

A robot's joints and links will then be discussed in the course material. Learn how joints provide relative motion while links are rigid members between joints. There are various joint types, such as linear and rotary, and each joint provides a ‘degree of freedom’. You will see how many degrees of freedom most robots possess. Robot architecture is the combination and disposition of the different kinds of joints that configure the robot’s kinematical chain. As you progress through the course, you will be taught that the relative position and orientation of the axes of two successive joints can be specified by two link parameters, link length and link twist angle. You will also learn that you can represent the orientation in joint co-ordinates by the YPR (yaw, pitch and roll) convention. In rectangular or Cartesian co-ordinates, the same can be represented by a rotation matrix R, where the three columns of R correspond to the normal, sliding and approach vectors respectively. You will discover that in order to manipulate objects, it is required to control both the position and orientation of the tool/end effector in a three-dimensional space.

Finally, you will study robot path planning: such a problem is formulated in a tool-configuration space, and robot motion is controlled at the joint space. You will discover that one of the potential problems with solving for joint space velocity is the non-existence of inverse, and the Jacobian matrix may not be invertible for all the values. Find out at which points in joint space, Jacobian loses its rank and why there is a reduction in the number of independent rows and columns. As part of analysing the Jacobian matrix, you will study joint spaces singularities and learn that the interior singularity is potentially troublesome, as it is formed when two or more axes form a straight line. This course will be of great interest to industrialists who might use robots in their factories or who are investigating automation. Students of mechanical engineering, especially those specializing in robotics, will also find this course particularly interesting.

You will be assessed on the following outcomes: