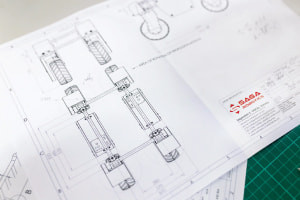 Kinematics, degrees of freedom, manipulator joints and links, and much more are covered in this free online course.

Publisher: NPTEL
Improve your understanding of robotics architecture with this free course. The material will being by addressing the degrees of freedom a robot may have. Next, look at robot anatomy, with an emphasis on the joints and links of a manipulator. You will be taught configurations for industrial robots and the characteristics of the Scara robot. Study the DH algorithm and direct forward kinematics, along with specific examples.
Start Course Now

Begin with kinematics in robotics, after which the DH (Diffie-Hellman) algorithm is addressed. A main thrust of the course is the degrees of freedom given to robots. In general, degrees of freedom (DOF) is the set of independent displacements that specify completely the displaced or deformed position of the body or system. You will learn that in robotics, DOF is a phrase that is often used to describe the number of directions that a robot can move a joint. You will also grapple with what ‘holonomic’ and ‘non-holonomic’ mean. Learn how links are rigid sections between joints and the specific type of motion joints can provide.

Next, move onto robot manipulators and their specific sections. Study how the robot’s body and arms position objects in its work volume and what the wrist assembly is used for. Robotics architecture is the combination and disposition of the different kinds of joints that configure the robot kinematical chain, and you will analyze the five common body-and-arm configurations for industrial robots, the last of which is the selective compliance assembly robot arm (or SCARA). SCARA robots are similar to jointed-arm robots except that the vertical axes are used for shoulder and elbow joints to be compliant in the horizontal direction for vertical insertion tasks.

Finally, you will be taught that the relative position and orientation of the axes of two successive joints can be specified by two link parameters, link length and link twist angle. Are the two link parameters always constant and specified as part of the mechanical design? How can the orientation of a tool can be represented in joint coordinates by the YPR (yaw, pitch and roll) convention? What are the differences between approach vectors and sliding vectors? This course covers robotics architecture in great detail and will be of special interest to mechanical engineers specializing in robotics.