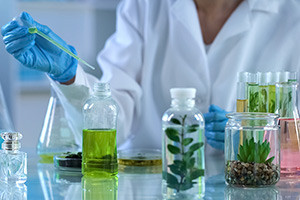 This free online course discusses the formation of solution, intermolecular forces, as well as the properties of gases.

Publisher: ADU
CLEP Chemistry: States of matter is a free online course that covers gas laws, and gas pressure. All gases share common physical properties. Like liquids, gases freely flow to fill the container they are in. While liquids have a specific volume, gases have neither a defined volume or shape. This course discusses the properties of gas and the variables affecting gas pressure. Register for this course to learn how to solve for molarity in solutions
Start Course Now

The states of matter are distinguished based on the differences in their bulk properties. The liquid state of matter adapts to the shape of its container but varies only slightly in volume. The solid-state maintains a fixed volume and shape, while the gas state of matter expands to occupy the volume and shape of its container. Scientists have performed many experiments to understand the common behaviours of gases. They have observed that the state of gas depends on four variables: pressure (P), volume (V), temperature (T), and amount (In moles). The relationships between these variables are now known as the gas laws. This free online course on CLEP Chemistry: States of Matter discusses Boyles law, Charles law, Gay-Lussac’s law, Avogadro's law and Daltons law of partial pressure. It explores the properties of gases, the conditions of the increment of gas pressure as well as the variables that affect gas pressure. You will learn about the assumptions of the ideal gas law. These assumptions are described by the kinetic molecular theory.

Furthermore, solutions are classified as homogeneous mixtures. The word homogeneous implies that the mixture is a single-phase where the properties will be the same no matter where a sample is taken. It can be confirmed that a mixture of more than one component is a solution most times by merely looking at our mixture. The course states the rule which determines whether two liquids dissolve to form a homogenous solution. The sections that follow discuss Henry's law and consider the process of dissolving sodium chloride (NaCl) in water. It explains the three major types of solutions and the effect of temperature on solubility. You will learn how to solve for molarity in a given chemical equation. The learning contents in this course is crucial for students, researchers, scientists or anyone with an interest in understanding the state of matter. So, register for this course to gain knowledge of gases, various gas laws and the formation of solutions.

Introduction to Liquids and Solids