Basic Programming in iOS11 and Swift 4 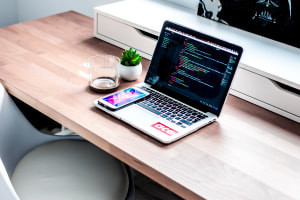 Publisher: YouAccel Training
Would you like to create your own iPhone and iPad iOS 11 apps but are unsure where to start? This free online course will introduce you to the basic foundations of building apps on iOS platforms. We will outline how to install Xcode 9, code Swift 4 and teach you some of the best programming practices. With the aid of object-oriented programming, you will be able to build professional apps. Let’s get started!
Start Course Now

We will install Xcode 9, which provides a completely rebuilt source code management component with seamless Git and GitHub integration. The ability to run multiple concurrent simulators and wirelessly debug on physical devices such as the iPhone and Apple TV makes it very suitable for programming. Object-oriented programming aims to implement real-world entities like inheritance, hiding, polymorphism, and more. The main aim of OOP is to bind together the data and the functions that operate on them so that no other part of the code can access this data except the function in question. OOP focuses on the objects developers want to manipulate rather than the logic required to manipulate them. This programming approach is well-suited for programs that are large, complex, and actively updated or maintained.

If you are working on a project over time, you may want to keep track of the changes made, by whom, and when those changes were made. This becomes increasingly important if you end up having a bug in your code. Git can also be a bit confusing when you first start learning it. Since the introduction of Apple devices, the demand for mobile apps has been steadily growing. As a result, the App Store has become a market leader where mobile users from every corner of our planet can find quality applications to their liking. This course introduces you to Git version control and the terminal basics. You will learn about the various actions you can do with the terminal and set up GitHub.This course outlines a comprehensive step-by-step guide from idea to execution on how to build professional iOS applications. So, register for this course today and begin your next learning journey!

Introduction to Xcode and Core iOS