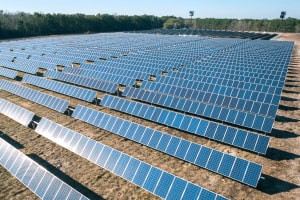 Learn about the potential of solar energy and the best strategies for better use of sunlight with this free course.

Publisher: NPTEL
This free course will introduce you to the potential of solar energy to satisfy the world's energy needs. You will learn about the phenomena related to the absorption of solar energy and the importance of maintaining a delicate balance of CO2 in the atmosphere. Next, you will study the background radiation of the universe and its characteristics. Finally, you will learn the process of capturing solar energy using the photovoltaic approach.
Start Course Now

Later, you will study the importance of maintaining a delicate balance of carbon dioxide (CO2) in the atmosphere and how the detrimental impact of increased CO2 on the environment is projected on a large scale. Some of the important aspects such as geographical locations, seasons, time of day that impacts the solar energy received for use will be reviewed. You will study the electromagnetic spectrum in general and the solar spectrum and the visible spectrum in particular. The electromagnetic spectrum is the range of frequencies of electromagnetic radiation and their respective wavelengths and photon energies. The solar spectrum coincides and is consistent with the type of behaviour of black body radiation which is thermal electromagnetic radiation in or around a body in thermodynamic equilibrium with its environment or emitted by an opaque and non-reflective body, its characteristics such as intensity and specific temperature will be discussed. The relationship between the temperature of the earth, black body radiation and wavelength and the factors that affect it is explained in this context.

Subsequently, you will examine the characteristics of a solar cell based on the p-n junction. The p-n junction is the fundamental structure of electronic components called semiconductors and this course will teach you the use and importance of the characteristics associated with the p-n junction. You will study the efficiency aspects of a solar cell and the construction of different types of solar cells. This will include the concept of tandem solar cells, which can be either individual cells or be connected in series and increase the overall efficiency of the photovoltaic cell. The advantages of hydrogen production and water splitting by photocatalysis over electrolysis are discussed. Finally, you will study the ways to approach the recombination of electron holes, photocatalysts which consist of a photochemical reaction that converts solar energy into chemical energy on the surface of a catalyst or substrate, consisting of a semiconductor material that accelerates the speed of reaction. This course is aimed at students who want to learn a little more about solar energy and the opportunities it offers as a source of clean energy. It would also be useful for professionals in the energy sector who wish to improve energy processes and equipment performance and are in search of more innovative ways to take advantage of solar energy. This course would also be of interest to the general public who wants to know a little more about this form of clean energy. Why wait? Start this course, today!

The Main Source of Clean Energy