Political Ideologies: An Introduction to Fascism and Conservatism 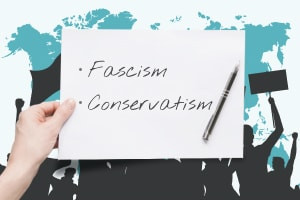 In this free online course, learn about Fascism and the need to keep away from Conservatism for society to progress.

Publisher: NPTEL
This free online course in Political Ideology introduces you to Fascism and Conservatism, and their main ideas and philosophies. You will learn about the necessity to avoid fascist-related dangers and how easily ordinary people can become involved. You will then study Conservatism and gain insight into this field of politics. You will also learn why we need to keep away from the lethargy of Conservatism for the sake of evolvement.
Start Course Now

This Course in Political Ideologies introduces you to Fascism and Conservatism. You will begin by studying Fascism and the necessity to avoid fascist-related dangers. The course particularly highlights the case of Adolf Eichmann, who was a major organizer of concentration camps where the Jewish people were exterminated. The course allows you to understand the involvement of ordinary people in Fascism.

As you progress through the course, you will also learn about the features to be considered to qualify a State as Fascist, and how Fascism contrasts to Conservatism. Through the work of authors such as Michael Oakeshott and David Hume, European Conservatism will be addressed. Finally, some specific worked examples from authors such as Rajesh Kasturirangan and Krzysztof Iwanek will enable you to understand Indian Conservatism.

This course covers two of the most fundamental themes in Political Ideologies and will be of great interest to anyone who specialises in Political Sciences. It will also be useful to anyone who is interested in political leadership, and will explain how to avoid the dangers of Fascism and to steer clear from some conservative thoughts to develop as a society. So, why wait? Start this course today and better your knowledge of Fascism and Conservatism