LabVIEW: A Creative Approach to a Real-World Problem 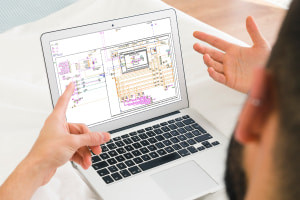 Build your career today in the modern programming world with this free LabVIEW online course available on Alison.

Publisher: Salim Khan
LabVIEW is a systems engineering software for applications that require testing, measurement, and control with rapid access to hardware and data insights. LabVIEW offers a graphical programming approach that helps you visualize every aspect of your application, including hardware configuration, measurement data, and debugging. Quickly integrate NI hardware and third-party devices together in one development environment to meet application needs.
Start Course Now

As a scientist or engineer, you'll often need to develop software that interfaces with test and measurement equipment, to acquire and generate signals, analyze data, control systems, and automate processes. LabVIEW is a system engineering platform that makes doing all of this as quick and as painless as possible. Unlike traditional text-based programming languages, LabVIEW uses a graphical programming environment. You write a program in LabVIEW by drawing a diagram. We'll look at the core components that make up most programs including different data types, and execution control mechanisms, like loops, shift registers, and case structures. We'll also explore how to debug and handle errors when your LabVIEW program doesn't work quite right. Finally, we'll use LabVIEW's express toolset to rapidly build applications for some of the most common use cases.

Historically, LabVIEW has been widely adopted in the automated test realm, essentially becoming the de facto standard in that application space, whereas more recently it’s been gaining traction within the realm of industrial embedded monitoring and control. LabVIEW is a software development environment created by National Instruments. Originally it was focused on taking measurements from various lab instruments, but it’s expanded drastically from its inception. Strictly speaking, LabVIEW is not a coding language, it’s a development environment. The language is actually called “G”, but most people refer to LabVIEW as if it’s a language (i.e., most people would say “it’s coded in LabVIEW”). There are thousands of different types of sensors out there, acquiring and measuring data from the real world. But how do you get that data into the computer for processing? LabView is a leading system-engineering platform for interfacing with data-acquisition hardware.

In this course, Salim demonstrates how to program LabVIEW to control National Instruments data acquisition (DAQ) hardware and acquire and generate analog and digital signals. Salim provides guidance on choosing devices, setting up LabVIEW, connecting and simulating devices, and acquiring both analog and digital input and output. He also explains how to configure LabVIEW triggers, log data, read files, and connect third-party hardware with the wide variety of instrument drivers available for LabVIEW.This course is great for beginners who want to learn the fundamental concepts of LabVIEW programming, as well as programmers and developers who aim to utilize the LabVIEW platform as their programming tool. This course will teach you everything you need to know about LabVIEW from scratch. It will provide you with a step-by-step guide on how the platform works. The goal is to get you up and running with LabVIEW as quickly as possible. Why wait? Let's get started.