Fundamentals of Nanotechnology in Animal Production 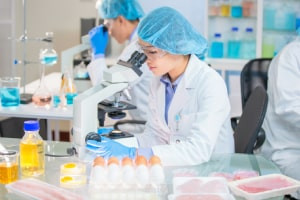 Explore the role and various applications of Nanotechnology in Animal Production with this free online course.

Publisher: NPTEL
Nanotechnology has become part of our everyday lives and in this free online course, you will discuss its applications in animal production, skeletal muscle development and importantly how it is used in food and food additives for the purpose of delivering nutraceuticals. Examine the role of the Cerium Oxide Nanomaterial as an antioxidant in animal production and the significance of biological synthesis in improving skeletal muscle development.
Start Course Now

The field of Nanotechnology (often referred to as “Nanotech”) is a thriving field of study that is primarily focused on innovation and enhancing things on the scale atoms, molecules and supramolecules. This free Fundamentals of Nanotechnology in Animal Production online course introduces you to the applications of nanotechnology in animal production as well as skeletal muscle development where you will learn how Cerium Oxide Nanoparticles (CeNPs) exhibit antioxidant properties both in vitro and in vivo based on the autocatalytic process. Thereafter, this nanotechnology course analyzes the role of the antioxidant molecules as food additives and the ability of nanoceria to scavenge free radicals, or reactive oxygen species (ROS), and inhibit inflammatory mediator production.

Once these concepts are covered, you will learn the significance of biological synthesis in improving skeletal muscle development as well as highlighting the process of modulating force generation of muscles using antioxidant nanomaterials. The final discussion will teach you about the fabrication of micro- and nanocantilevers for testing drugs without getting them into the animal’s system along with the applications of the various kinds of nanomaterials in the field of animal production.