Diploma in Geometry for General Studies 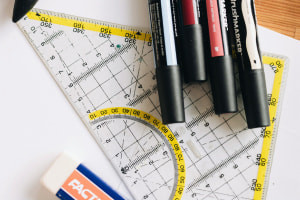 This free maths course explains geometric functions, their applications, and gives an overview of logic statements.

Publisher: ADU
This is a self-paced online course that introduces you to geometric functions and their applications. Geometry applies to many fields in real life. Professional jobs like animation, game development and CAD engineering use geometry in their day-to-day activities by manipulating shapes. You will learn about the basics of geometry so register for free and begin your next journey!
Start Course Now

This course introduces you to geometric functions and their applications. It explains more about geometric concepts, Euclidean geometry, and congruent triangles. The course begins by introducing you to symbolic logic - in other words, logical statements can be analyzed by using symbols. When we try to draw conclusions from statements, we find that their meanings and relationships to other statements are not always clear. By representing these statements using symbolic logic, we can easily come to valid conclusions. The course then introduces you to the study of critical thinking, which allows you to prove statements are true. Instead of making a truth table for every argument, we may be able to recognize certain common forms of arguments that are valid or invalid. The course then moves onto Euclidean geometry, a mathematical system attributed to ancient Greek mathematician, Euclid You will learn about the relationships between figures on both 2- and 3-dimensional spaces.

Next, you will learn about quadrilaterals and the similarity of triangles. The course explains the different quadrilaterals, their properties, and their similarities with triangles. The formal definitions of these quadrilaterals only give some information about them: each quadrilateral has other properties that can be proved. For example, while a parallelogram is defined as a quadrilateral with two pairs of parallel sides, it can be proved that the opposite sides of a parallelogram must be congruent. Similar triangles are triangles that have the same shape, but their sizes may vary. Two objects are similar if they have the same shape, or one has the same shape as the mirror image of the other. This will help you in proving geometric theorems and solve some problems with polygons and triangles. Ratio and proportion will be explained largely based on fractions.

Lastly, you will study circles where you will learn about the definitions and applications of circles in geometry. Coordinate geometry is one of the most important and exciting ideas in mathematics. It provides a connection between algebra and geometry through graphs of lines and curves. There are many applications of geometry that can be used in our day-to-day life. For example, circular cylinders are used to print newspapers. Engineers exploit the circle's symmetrical properties as seen by the use of circles in making watches, clocks and bicycles etc. In mathematics, transformation geometry is the name of a mathematical and instructional take on the study of geometry by focusing on groups of geometric transformations, and properties that are invariant under them. By the end of this course, you should be able to identify the formulas of proof using coordinate geometry and explain the composition of transformations. So, register today and begin your next learning journey!