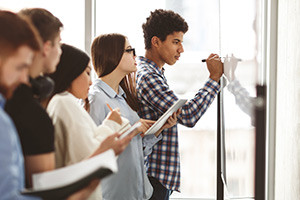 Publisher: ADU
CLEP College Algebra: Number Systems and Linear Equations is a free online course that introduces you to the foundations of algebra. Understanding algebra as a concept is more important than solving equations and finding the right answer. By the end of this course, you should be able to apply this knowledge of algebra in business when predicting sales, growth, and profit. So, register for this course today and begin your next learning journey!
Start Course Now