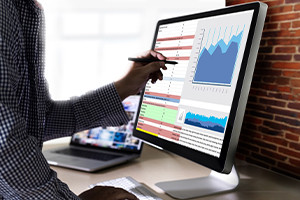 This free online course describes the concepts used for collecting, analyzing, and drawing conclusions from data.

Publisher: ADU
This free online course covers anticipating patterns involving the exploration of random phenomena using probability and simulation. The course includes details on statistical Inference used in estimating population parameters and hypotheses. By the end of this course, you will be able to use probability for anticipating the distribution of data under a given model. You will also be able to select appropriate models for data distribution
Start Course Now

Furthermore, you will be taken through estimation as an essential concept in statistics. You will learn how estimation is determined through measured and observed data. It is important to learn about the parameters used in calculating errors and stating the level of confidence on data based on probability. You will learn how choices are made to arrive at confidence levels. You will also be able to describe statistical inference and how it answers specific questions about an unknown population. The course explains how a significance test is used as a formal procedure for comparing observed data. You will be shown the parameters used in calculating large samples' confidence interval of proportion. Parameters used in large sample confidence intervals will also be highlighted. You will learn how to test a hypothesis based on the size of a population with an unknown mean. You will also conduct mathematical experiments on how to test for the difference between two means. Start this course today and get insights into the major concepts and tools used for collecting, analyzing, and drawing conclusions from data.