Use Arduino without Internet to Control all your Electronic Devices 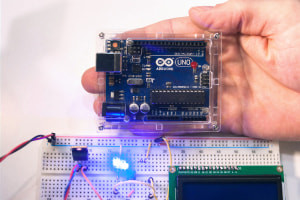 This free online course teaches about the sensors and techniques involved in designing the Arduino Solar Tracker.

Publisher: Ashraf Said AlMadhoun
This exciting online course will show you how to make your own Arduino Solar Tracker. Following an easy step-by-step process, you'll learn to use light-sensitive sensors to track sunlight and direct the solar panel towards the areas that increase its efficiency. The program is written using the Arduino IDE, an open-source electronics platform. Increase your Arduino Solar Tracking knowledge and skills by studying this comprehensive course.
Start Course Now

Are you looking to build your own Arduino Solar Tracker from scratch? This course will guide you through the process of using Light Dependent Resistors (LDRs), which are light-sensitive devices in your solar tracking project. You utilise four Light Dependent Resistors (LDRs) to detect the sunlight and send signals to Arduino, guiding two servo motors to place the solar panels in an optimal position that maximises their efficiency. You will discover that the servo motors move the solar panel towards the LDR, where the resistance is low. This resistance decreases as light falls on the Light Dependent Resistor. When the light falls equally on both resistors, the solar panel doesn't move as this will be optimal. You'll learn more about Arduino, an open-source electronics platform based on easy-to-use hardware and software.

At first, we will introduce you to the hardware requirements that you will need to design your Arduino solar tracker. The Arduino board is critical in this project since it can read inputs and turn them into outputs such as activating a motor. Using the Arduino programming language and the Arduino software, you can send a set of instructions to the microcontroller via the board. The other necessary hardware that you will use is the photoresistor. The resistance on this resistor varies depending on the intensity of the light. It is made of a high resistance semiconductor that absorbs photons. We will explain that depending on the quantity and frequency of these absorbed photons. The semiconductor material gives the bound electrons enough energy to jump into the conduction band. As a result, the free electrons will conduct electricity which will lower the photoresistors' resistance.

Discover that the solar panels move to the optimal position because the Arduino code sends LDR readings to the Arduino board to control the two servo motors. Where is the solar tracker program written? This course will clarify that you will use the Arduino IDE to program your solar tracker. You will master the two main methods of creating a new file in this software: void loop and void setup. You will explore the interface of the fritzing software and find out that you can use the Arduino web editor without downloading and installing any software, depending on your preference. Finally, you will study light-sensitive sensors, schematic wiring diagrams, circuit design and loop coding. Don't delay if you're an electronic circuit expert or are passionate about designing a solar tracker! Sign up for this course today and learn how to create your first Arduino solar tracker.

Free, Online Use Arduino without Internet to Control all your Electronic Devices Course