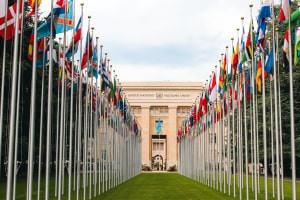 Publisher: My Global Politics
In this free online course, you will be presented with a complete introduction to international relations which is an important academic discipline. This course will make you a better thinker and speaker by giving you the knowledge and understanding of the key aspects and basics principles of international relations along with the unique relationships that exist between many nations, sovereign states and their respective cultures.
Start Course Now

The study of international relations revolves around states and this international relations course will analyze governments, agencies, bureaucracies, how states are organized, the role of agencies and bureaucracies within states and the impact that they have on the foreign policy of the state. This course will also discuss how inter-state relations have evolved since the Middle Ages and what the Westphalian system means. A peace treaty is a legal agreement between two or more hostile parties, typically nations or governments, that formally ends the parties' state of war. You will be shown the peace treaties of Augsburg and Westphalia and the emergence of modern statehood. Power in international relations is defined in different ways and there are different approaches to how power is measured in IR. This course goes on to explore the different forms of power, power in the Middle Ages, the evolution of European states and religious wars. What exactly is war? You will be shown the actual meaning and causes of war and the  approaches that can be used to achieve international peace. International politics deals with the interaction between political and economic forces. The course content thoroughly explains the concepts of liberalism, realism and Marxism and their different approaches to the international political economy and globalization. This course goes on to discuss the relationship between the organization of political authorities within states and how effective they are in responding to the Covid19 pandemic.

This course is important if you want to have an understanding of international relations in a broad sense, become a diplomat, or if you are simply interested in learning more about how the world works and how we have reached our current global state of affairs.

History, Theories and Evolution of IR