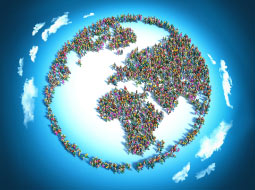 Learn more about population distribution patterns, population dynamics and behavioural biology, and the impact of unchecked population growth on the environment.

You will learn about species populations, how life patterns evolve through natural selection, and how species behaviours are influenced by the environment. The course begins by introducing you to the tools that ecologists use to measure the characteristics of populations such as size, density, dispersion pattern and age structure. You will also learn how life tables are used to calculate population life expectancy. You will learn to identify the environmental limits to population growth, how populations with unlimited resources grow exponentially and, when resources become limited why populations then follow a logistic growth curve. You will gain an understanding of population dynamics and regulation based on density-dependent and density-independent factors and learn how the age structure of a population allows us to predict population growth. You will also learn about the characteristics used to categorize species. Finally, you are introduced to community ecology where you will learn the features of community structure and keystone species, and how some species can form symbiotic relationships within an ecological community. You will be introduced to behavioural biology and learn about behaviours such as imprinting and habituation, conditioning, and cognitive learning and methods of communication.

The course will be of great interest to professionals working in the areas of ecology or environmental science, and who would like to learn more about the social and environmental consequences of population growth, and the different characteristics of species behaviour.

After completing this course you will be able to: - Explain how ecologists measure population size and density; - Describe three different patterns of population distribution; - Use life tables to calculate mortality rates; - Give examples of exponential and logistic growth in natural populations; - Explain how the carrying capacity of a habitat may change; - Define density-dependent and density-independent growth regulation; - Explain exponential and logistic growth in wild animal populations; - Define how natural selection and environmental adaptation leads to the evolution of particular life-history patterns; - Explain how humans have expanded the carrying capacity of their habitat; - Relate population growth and age structure to economic development; - Discuss the long-term implications of unchecked human population growth; - Explain the predator-prey cycle; - Define the competitive exclusion principle; - Discuss community structure and succession; - Compare innate and learned behaviour; - Explain how species use energy for mating displays and other behaviours; - Differentiate between various mating systems; - and define the various ways that species learn.