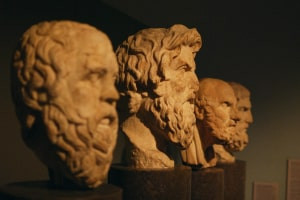 In this free online course, you will study philosophers from the Age of Enlightenment and their views on various rights.

Publisher: NPTEL
This free online course in influential political philosophers covers world-famous thinkers such as Kant, Hegel, Marx and Mill. You will learn about the concept of freedom and free will as put forward by Kant and Hegel. This course will discuss exciting topics like alienation, suffrage and exploitation of workers all with different points of view from these interesting philosophers.
Start Course Now

What does it mean to be an influential philosopher? Do you have to have a Nobel Peace Prize? Should people know of your eccentricities? Or should it just be when you read the name 'Karl Marx', while you may not be familiar with his theories, you certainly know his name. The philosophers discussed in this course have had an important impact on the way people view the world and operate within it. Karl Marx dreamt of the freedom of the working class, Wilhelm Friedrich Hegel found inspiration in idealism, Immanuel Kant inspired Hegel through his work during the Age of Enlightenment and John Stuart Mill fought for the liberation of women. We begin our journey with Immanuel Kant who was born in Germany, 1724. As a representative thinker of German idealism, Kant stands as the most quintessential figure of Enlightenment, a term which is usually referred to as the age of reason. According to Kant, Enlightenment can be defined as a philosophical movement that included the advancement of ideals such as liberty, toleration and progress. As you will see from studying this course, Kant was a firm believer of these ideals and added to this movement through his body of work. As you work through the course, you will learn more about Kant's political and philosophical theories.

The next influential thinker discussed in this course is Hegel. He thought that human will is the free and practical part of the spirit. The realisation of the will, in his opinion, requires the presence of others. Hegel was a part of the era of 19th-century philosophy which was based on realism. During your study, you will be introduced to different theories of his which include German idealism and Hegelianism. Hegelianism comes from Hegel himself and it says ''the rational alone is real”. Just like Hegel, you will be introduced to Marx who wanted true freedom for humanity, but believed it to be possible only in the state of communism, where there is no private property, politics nor class conflicts. In Marx’s opinion, the mode of production in any given society divides people into two main classes, haves and have-nots, referred to in the capitalist system as the bourgeoisie and the proletariat, respectively. This course will introduce you to a side of Marx that is generally unknown within popular culture.

In the final part of the course, you will be taught about John Stuart Mill, a famous British philosopher of the nineteenth century. As an unconditional defender of liberty and equality among men and women, he lobbied for women's rights including suffrage or the right to vote. In Mill’s opinion, men and women will have a more satisfying and enriching experience as equals, rather than one gender controlling the other. Mill believed in equal opportunities for men and women and this is especially true in his campaign for opening employment options for women. He believed that an equal world is a better world. You will see how Mill differs from the previous philosophers' eras and studied Utilitarianism. Utilitarianism can be best described as the natural need for humans to seek pleasure and avoid pain. You will study the theory that happiness drives humans and is their sole motive. This course will allow you to delve deeper into the theories of some of the philosophers that have gone before us and left us their work to interpret and learn from. This course will be useful to students specializing in philosophy. Start this course today and improve your knowledge of influential political philosophers.