Learn about Local Area Networks and the seven layers of the OSI Model with this free online computer networking course.

Free Course
Understanding how computers communicate with each other is a highly valuable skill that not many people possess. This is why computer technicians are much needed in the IT industry. This computer network course will teach you about the key devices found on local area networks (LANs), the structure of the most common types of LANs, and the seven layers of the OSI model that allow devices on networks to communicate with each other.
Start Course Now 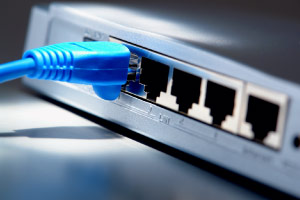 First, you will study the basic concepts of networking and Local Area Networks. You will learn the key devices found on LANs such as hubs, switches, and routers, and how each of these devices functions to allow for effective and efficient communication on the LAN. You will then study the functions of IP addresses and how they are broken down into Network ID and Host ID components. The course will also cover the main network topologies, including Star, Bus, Ring and their functions.

Next, you will study the Ethernet - the most widely installed LAN technology - and learn how devices on an Ethernet network communicate with each other using Frames. You will then cover the seven layers of the OSI Model and learn how data is passed through them to allow two devices to communicate with each other. You will also study the TCP Model and learn about the similarities and differences between the OSI Model and the TCP Model in terms of their structure and functions.

Everybody uses computer networking for educational, business, or leisure purposes. However, not everyone understands what it is, how it functions, and what it does. This course will be of interest to all learners who would like to learn more about computer networking, in particular, the structure and function of LANs and the OSI Model. It will also be very useful to those who are considering computer networking as a career. So, have a look inside the course, and see if this is the next learning journey for you!