Chemistry - The Nature of Substances

Learn more about the factors that affect the chemical nature of substances with this chemistry course.

Teaching & Academics
Free Course
This free online chemistry course will teach you about the nature of substances. You will learn that the amount of energy required to change the state of a substance depends on how strong or weak the bonds between the molecules are, study the factors that affect the chemical nature of substances, and learn why the substances' change of state can be affected by mixing them together. Take this course today and learn about the world of chemistry.
Start Course Now 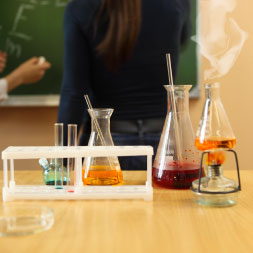 This course begins by discussing the factors that affect the chemical nature of substances. You will study Van Der Waals Forces which are the class of all of the intermolecular forces that are not covalent bonds nor ionic bonds. You will also look into covalent networks which are the strongest intermolecular forces or structures of elements, metallic crystals which are made of metal elements with atoms arranged in similar patterns, and ionic crystals which grow from ionic bonds and are held together by electrostatic attraction.

You will then look into vapour pressure which is caused by the evaporation of liquids and study the three common factors that influence vapour pressure. This course will also discuss suspensions, colloids, and solutions. You will also study solubility which is the ability of a given substance to dissolve in a solvent, the boiling point elevation which is when the boiling point of a solution exceeds that of the solvent, and freezing point depression which is the decrease of the freezing point of a solvent on the addition of a non-volatile solute.

Substances with strong bonds at standard temperature and pressure, like diamonds, have molecules that are extremely difficult to separate, whereas substances with weak bonds, like helium, remain in a gaseous form and do not condense into liquid or solid states. Upon the completion of this course, you learn more about how bond strength affects state change, the different types of bonds, and the different types of suspension. Sign up now and learn more about factors that affect the chemical nature of substances.

Module 1: Understanding Factors that Affect the Chemical Nature of Substances