The Basics of Script Analysis 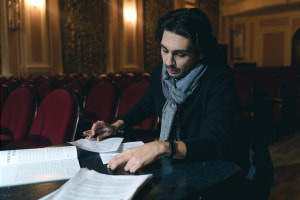 Learn the foundational basics of script analysis and the various acting techniques in this free online acting course.

Publisher: Emma Paunil
Bring your passion and enthusiasm for acting and delve deep into the world of script analysis. This free online course promises to teach you all you need to know about script work including the basics of script analysis, the essential seven acting techniques, their origins, and the personalities behind each technique before moving on to the importance of clearing your mind before working on a script and memorization tactics.
Start Course Now

This free online acting class course is a comprehensive way to cover everything included in working with a script. You will learn about script analysis, the 5 W’s in scriptwriting, various acting techniques, as well as the best ways to memorize scripts. You will be shown the tools you need to apply in order to work on your scripts and in the introductory section, you will be introduced to the course, the outline, and the instructor before getting straight into the foundational basics of script analysis. You will study three main things in this section. (1) The job of an actor, given circumstances and why Constantin Stanislavski is one of the most influential people in the acting community, (2) the teachings and techniques of Stanislavski and (3) Stanislavski’s ‘The Method’ or seven-step system. This section includes the important differences between detective work and interpretation, obstacles, and intentions in acting.

The next part studies further, the seven acting techniques to have better context of each technique and where they originated from, as well as the personalities behind those techniques. The three aspects of Stanislavski’s system or method will be covered, Vakhtangov’s fantastical realism and monism, Chekhov’s psycho-physical approach, Lee Strasberg’s method acting, Adler and Meisner’s techniques, and the four-step analysis of practical aesthetics are also covered. Having a clear mind before working through a script is critical to understanding and delivery and the scientific aspects and effects of meditation on the brain will be highlighted in this section. Some other key themes included, are releasing tensions and stress patterns, and a guide on how to meditate before acting or starting a script. There are several ways of memorizing a script and you will be taken through all of these with a specific focus on the differences between muscle- and conscious memory for script work. A link to a video showing how to memorize ten times faster using imagery will also be provided which acts as a foundation for inner visualization or “story-boards”, to help you break down the context, the characters and make your scripts easy to memorize. A brief example of how to go through a monologue, breakdown the script, and use them alongside the storyboard worksheet will be discussed. Additionally, you will be taught how to decide on which acting technique to use - three simple exercises on Stanislavski, Meisner, and Strasberg techniques to help you practice and have a feeling of the acting techniques will be illustrated. Lastly, the “Paunil technique” using Goleman’s emotional intelligence model will be explored.

This course is for beginners, acting students, and actors who are interested in studying the basics of script and acting techniques. Those who frequent theatre will also gain great new insight into the art of acting and which methods actors employ to ensure a captivating delivery. You should enrol if you have an interest in filmmaking, casting, cinema and everything in between.