Numbers and Sequences in Mathematics 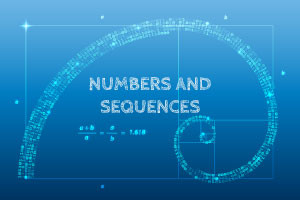 Gain an understanding of how numbers are arranged, stored, displayed, and used in Mathematics.

Publisher: XSIQ
This free online mathematics course will teach you about numbers and their sequences. Numbers, the foundation of mathematics, can be simple or complex. This course cover important mathematical topics about numbers, from writing them in scientific notation and multiplying powers, imaginary numbers, natural numbers rational numbers, and irrational numbers. Start this free course today and give your mathematical skills a solid boost.
Start Course Now

An understanding of whole numbers is the essential and fundamental foundation of mathematics, and, along with the infinite sequence in which they are arranged, stored, and displayed, are vital to your understanding and ability in Mathematics.

The course starts off by discussing how large decimal numbers are written in the standard form or in scientific notation. You will learn how to convert from decimal format to the standard form and back again. You will also learn about working with indices or powers when they are negative, fractional, equal to 0, a set of natural numbers, and how to multiply and divide numbers with indices.

Next, you will be tought about patterns with imaginary numbers, what imaginary numbers are, and the definitions of rational, irrational, and prime numbers. Then you are introduced to the mathematical concept of proof by contradiction, how to find cubed roots, along with how to change the base of a logarithm and work out a logarithmic equation.

The second half of module two will introduce you to the limit of sequences in mathematics, taking you through an example. After which you will learn about an arithmetic series and a geometric series and the formula for both of them. You will learn about deriving an amortisation formula from a geometric series, and about four different circumstances under which, proof by induction can be applied.

Having completed this course students will be able to: