Beginner in Prevention of Pollution by Oil from Ships 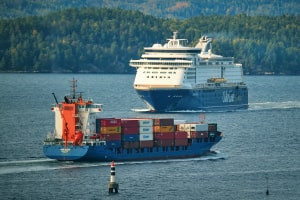 Learn about the basic causes and conventions to curb oil pollution from ships and tankers in this free online course.

Publisher: ADU
'Introduction to Prevention of Pollution by Oil from Ships' is a free online course that teaches you the basics of preventing marine pollution from shipping vessels. You will gain relevant knowledge of the sea laws, marine conventions and major causes of pollution in the ocean environment.
Start Course Now

Shipping is essential to the trade and movement of goods around the world but sometimes at the cost of oil pollution. After the Exxon Valdez tanker spilled its load of crude oil off the coast of the Gulf of Alaska in 1989, the Oil Pollution Act was passed by American president George HW Bush in 1990. The OPA aims to avoid future spills by setting out the responsibilities for cleaning and rectifying damage, and specifying liabilities for violators. It amended the earlier Clean Water Act and addressed the wide range of problems associated with preventing, responding to and paying for oil pollution incidents in navigable waters of the United States.

‘Introduction to Prevention of Pollution by Oil from Ships’ is a free online course that provides an in-depth analysis of the sources and effects of marine pollution by ships and oil tankers. It highlights the reasons for, and importance of, the regulations enforced to prevent pollution by oil from ships. In this course, you will learn about the Oil Pollution Act of 1990, the MARPOL (or International Convention for the Prevention of Pollution from Ships) Annex I as well as the MARPOL 73/78 Annex 2 conventions for minimizing ocean oil contamination. You will also study the international classification of marine areas as well as the position of the US on the law of the seas and a brief summary of the main provisions of MARPOL. Analyze the rights and responsibilities of nations with respect to the use of the world's oceans; established guidelines for businesses; as well as the management of marine natural resources. You will learn about the major conventions formed to curb marine pollution and regulate the use of the world's oceans by individual states. Grapple with the basic obligation of all countries to protect the marine environment as well as discuss flag state and port state responsibilities.

This free course aims to impart the knowledge and values necessary for pollution prevention from shipping and tanker operations. You will study the sources and effects of marine pollution and examine the categories of contamination covered in the various conventions. Delve into the importance of bunkering operations and the adverse effect on shipowners as well as the penalties attached to the failure to comply with correct bunkering procedures. Learn about the risks due to spills, fire and explosions of a tanker during loading, transportation or discharging operations. Study the details of the prevention of oil pollution when pumping out bilges and cleaning the oil tanks. You will also study the effects of hazardous and noxious substances as well as the consequences of a chemical spill. This course will be of significant interest to marine engineers and marine environmentalists or anyone studying these disciplines. Register for this course now and begin your next learning journey today!

Sources and Effects of Marine Pollution

Free, Online Beginner in Prevention of Pollution by Oil from Ships Course