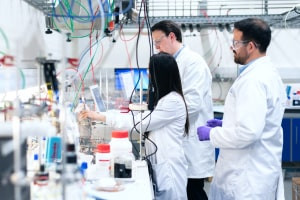 Understand advanced microbial engineering skills for the production of biofuel and amino acids, in this free course.

Publisher: NPTEL
In this bioscience course, you study the transgenic technologies for transformants selection, and the systems for genome editing and manipulation. Also, the applications of microbial trait improvements for biofuel and amino acids production will be discussed. By completing this exciting course, you will acquire in-demand technical knowledge for a rewarding career in systems biology or metabolic engineering. Enrol now and start studying today.
Start Course Now

A transgenic microorganism is a microbe that has been altered by using recombinant DNA technology to insert foreign genetic materials into its genome. You will see how metabolic engineering achieves cell metabolism rewiring and metabolic network manipulations via transgenic technologies. Learn how you can modify microbial target genomic DNA sequences, and acquire vital knowledge for DNA pathway reconstruction. The exciting features of genome-editing technology will highlight the efficiency and reliability, as well as the precision and rationality, of the past and current models. You will dissect the promoters, ribosome binding sites, and RNA-mediated gene modulation techniques, as well as their essential functions in efficient protein production. Learn about the importance of gene copy number in replicon plasmid labelling and microbial engineering. The advantages and shortcomings of tools used in metabolic pathway engineering like multiplex automated engineering (MAGE), tunable intergenic regions (TIGRs) and co-selection MAGE (CoS-MAGE) will be highlighted. The basic ideas of the Clustered Regulatory Interspaced Short Palindromic Repeats (CRISPR) systems, as well as the CRISPR-associated (CRISPR-Cas) genome editing tools, will be discussed. You will see how the development of CRISPR provided robust technologies for advancements in genome editing and synthetic biology techniques.

Next, a brief history of the CRISPR-Cas tool, and the advantages of this technology will be presented. You will learn about the CRISPR array and the classification systems of the prokaryotic adaptive immune system. The module on the structure of the CRISPR locus will cover the unique and repeat-spacer regions of microorganisms with an overview of the Streptococcus thermophilus biome as a corresponding case study. You will examine the important features of the ‘leader sequences’, the three crucial steps in CRISPR-mediated immunity, as well as the vital functions of the Cas proteins. Similarly, the concepts of protospacer, biogenesis, and interference will be explained. You will learn about the most widely used type II CRISPR-Cas method developed from the bacteria Streptococcus pyogenes, as well as the vital components required for its functions. In addition, you will study how the model affects gene introduction and deletion strategies via non-homologous end joining (NHEJ) and homologous directed repair (HDR) mechanisms. Then, the advantages of this system over other conventional tools will be discussed. The application of the CRISPR interference (CRISPRi ) gene transcription control system and the mutation of the two nuclease domains of Cas9 proteins, which results in the catalytically deactivated Cas9 (dCas9) will be explored. Likewise, you will compare and contrast the gene editing and regulatory models by examining the Cas9 and dCas9 domain proteins of S. pyogenes. The models will cover the endonuclease activities of the Nuclease lobe (NUC) and Recognition lobe (REC), as well as the binding activities of the RuvC1 and HNH (H841A) domains.

Finally, the complex gene circuits for the control of the reporter gene repT and conversion of phenylacetate to toluene via the lac operon (lac O) will be studied. Learn about CRISPR activation (CRISPRa), and CRISPR interference/activation (CRISPRi/a) procedures, and their applications in microbial pathway engineering. The classifications of the important chemicals produced by the microbial cell factories will be shown, and the significance of large-scale production of the chemicals will be tabulated. The modules on metabolic engineering for biofuel production will examine the microbial cell factories, feasible economic processes, and raw materials for producing biofuels. You will learn about the roles of the ethanologens and enteric bacteria in ethanol production, as well as the adaptive evolution strategies proposed for trait improvement in E. coli and S. cerevisiae for better biofuels yields. The applications of metabolic engineering in amino acids production via the rational intuitive approach, as well as the systematic and rational-random strategies for the design of microbial strains, will be explained. Then, the concepts of cofactor engineering, and the ‘trigger effects’ that enhance the production of L-glutamate from C. glutamicum will be discussed. What are the most effective tools for gene editing and pathway expression? How can the microbial cell factories be improved to obtain the desired chemicals in commercial quantities? These questions will be addressed in this course and the facts that surround them will be considered. The complex and highly technical aspects of this course have been simplified to make it more exciting and rewarding. Are you ready for the challenge? Start this course today!