A Quick Guide to the Russian Alphabet 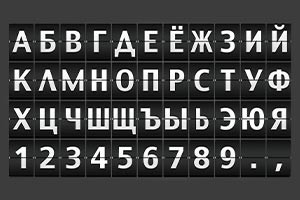 Learn how to read, write, pronounce and recognize the phonetics of the Russian alphabet with this free online course.

Publisher: Yauheniya Kliuyeva
Did you know Russian is the second-most popular language on the Internet, after English? This free online course aims to provide learners with the basic knowledge needed to understand grammatical peculiarities, vowel soft sign and hard sign differences, and the correct pronunciation of each letter of the Russian alphabet. Learn the fundamental theories and norms of Russian phonetics and grammar, and get ready to advance your language learning.
Start Course Now

There are over 258 million Russian speakers around the world. Are you one of them, or are you hoping to learn to speak Russian? One of the first steps in the right direction will be to understand the Russian alphabet, and you need to look no further than this free online course to do this. We will take you through identifying, correctly pronouncing, and reading each letter to understand the distinction between vowels and consonants. Even if you know basic Russian, the course will provide you with intensive tuition to improve your articulation skills. You will also expand your vocabulary with well-known terms for things, people, and animals. We have assorted the course material into three sections for a more comprehensive interaction through video-based lessons. We will start with the letters A to И, followed by the letters from Й to Т, and conclude with the vowels and consonants from У to Я.

The historical evolution of the Greek script into the Slavic language or Cyrillic alphabets, formerly known as the earlier Glagolitic script, is the tale behind the visual and phonetic intricacy of the Russian language (Old Church Slavonic). The Cyrillic script is an ancient writing system that is being used today in Eurasia for various languages, including East Slavic languages like Russian and Ruthenian (Ukrainian, Rusyn, and Belarusian). The Russian Cyrillic alphabet has 33 letters, 10 of which are vowels that are grouped by phonetic similarity into the following pairs: А—Я, О—Ё, Э—Е, Y—Ю and Ы—И. This course signifies the practice of the Russian language in a simple methodology throughout instructor-based exercises. You will study the difference between a hard sign and a soft sign applicable for vowels to distinguish similar written words such as за́мок 'castle' vs замо́к 'lock'. The learning process of the Russian alphabet is a compendium of video mini-lessons to illustrate and correlate ordinary words and phonetics to their alphabet letters.

Finally, the learning journey will increase your language proficiency and communication skills. You will comprehend the significance of each letter in the Russian alphabet while expanding your vocabulary with more than 300 new words. Following this, we will practice basic reading rules to strengthen your listening ability to understand the Russian language better. These include speaking and pronunciation of each vowel and consonant of the alphabet. Subsequently, you will study Russian literary expressions such as poetry and rhymes to encourage you to exercise your language abilities. Learning the Russian alphabet and reading its letters is the first step toward speaking this language. After all, it is a lot easier than you might imagine. 'A Quick Guide to the Russian Alphabet' is an enlightening course covering the basics of the Russian language and the fundamental knowledge to understand the basic reading rules. You will also improve your hearing and speaking skills to comprehend the proper pronunciation for each letter of the alphabet. Sign up now to avoid disappointment.

The Russian Alphabet from Letters A to И

The Russian Alphabet from Letters Й to Т

The Russian Alphabet from Letters У to Я

Free, Online A Quick Guide to the Russian Alphabet Course