Introduction to Quadratic Equations and Inequalities for General Studies 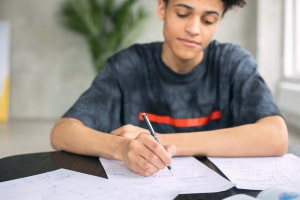 The free online course teaches you about quadratic equations and inequalities, as well as various exponential functions.

Publisher: ADU
If you are a professional, a student or someone who has a keen interest in understanding quadratic equations and inequalities, this free online course will help you. Study the discriminant of roots and nature of roots, before moving on to look at quadratic-linear systems of equations. The solving of quadratic inequalities algebraically and by number line analysis, as well as properties of exponential functions will also be covered in the course.
Start Course Now

If you want to learn about other methods of solving quadratic equations such as frame problems and projectile motion, then you should complete this course. While going through this course, you will learn about the two methods of solving quadratic-linear systems which include; solving quadratic-linear systems graphically and algebraically. You will also learn about the concepts of quadratic inequalities, as well as how to solve quadratic inequalities. Did you know that quadratic inequalities can be solved using algebraic methods of set theory and number line analysis? To gain a better understanding, you should know the conditions involved in using these methods. You will also be able to identify the concepts of transcendental and trigonometric functions. This course can also help you understand the concepts, definition and properties of exponential functions. The graphing, applications and inverse of exponential functions will be covered extensively in this course. You will become familiar with Type I and Type II exponential functions. It is also imperative that you learn the two methods used to solve exponential equations; either algebraically or graphically.