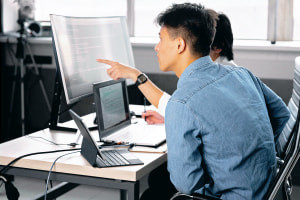 This free online course covers how to program using Kotlin, the installation of Intellij lDEA, JDK and Android Studio.

Publisher: YouAccel Training
Introduction to Kotlin for Android is a free online course that explores the features and concepts of Kotlin programming language. It describes the installation process of Android Studio for Mac and Windows along with how to use Kotlin to program applications, its basic programming structures and all the other features such as how to assign variables, classes, data types and set up an emulator among others, to kick off coding with Kotlin.
Start Course Now

Kotlin is a statically typed, general-purpose programming language which was developed by JetBrains. Kotlin coding language has a lot of functional programming elements. It ranges from its object-oriented side, to support nominal subtyping with bounded parametric. This free online coding course has been specifically put together to take you through a wide range of concepts and applications of the Kotlin programming language. It starts by giving an overview of Kotlin and outlines some of its features: types of inference, fewer codes, and mixed language databases amongst others. The introduction of the Kotlin language to the programming space plays a key role in solving certain problems faced in other languages - it is relatively simple and carries very few rules compared to Java and other programming languages. Although Kotlin was inspired by Java, it is an improved version. For instance, the null pointer exception (NPE) is one of the main drawbacks of Java but is solved by Kotlin.

This coding tutorial teaches you a host of practical tips for installing and setting up the Java Development Kit (JDK) and Android Studio for Mac and Windows, the functions of a software development kit (SDK) manager, process of creating an emulator in the Android virtual device (AVD) manager, and how to manipulate controls in the emulator. The next section delves into Android Studio itself and you will learn about its features, how to create an application in Kotlin, the process of creating a new project and customizing your application, and how to run the applications you have created on actual Mac, Linux and Windows devices.

To create an application you will need to start with creating a project, assigning variables, data types and giving the compiler instructions to be executed. Declaring variables in Kotlin may be easy, but what happens when you want to declare a mutable variable or create variables with different data types? This programming course discusses the concept of mutability, the various data types used in Kotlin as well as how to declare a variable without setting a value to it, and the escape characters that are supported in Kotlin. To successfully design easy-to-read code with Kotlin, you will need detailed knowledge of how Kotlin language functions including the appropriate use of strings, conditional logic, how to handle multiple conditionals, the concept of classes, instances of a class, lambda expression and function interpolation. Enrolling in this Kotlin for Android course will teach you all of this and more, whether you are a beginner to coding or are a seasoned programming professional and are keen to gain experience in the Kotlin language and create functional programs and applications.