Introduction to Data Exploration and Distribution in Statistics 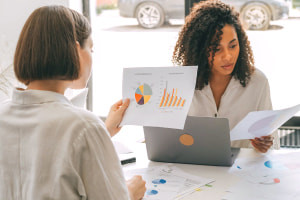 Publisher: ADU
This free online course describes Data exploration as a statistical concept in data analysis where the data analysts use data visualization and statistical techniques to describe dataset characterizations. The course also describes data distribution and how it specifies all possible values for a variable. Upon completion of this course, you will become more informed on the importance and tools used in data exploration and data distribution.
Start Course Now

The main aim of data exploration is to gain an understanding of the datasets. This free online course on Introduction to Data Exploration and Distribution in Statistics begins by defining some commonly used terms in statistical analysis. You will study the concept of univariate data where each data point has a single variable. You will learn how visual representation is used as a very powerful technique to examine a data set at once and reveal patterns in the data that are hard to detect. You will discuss how to create charts which are the most frequently used method for displaying data. You will also learn about other methods used for displaying including Frequency Tables, Dot Plots, Stem Plots, Frequency Histograms and Cumulative Frequency plots. The course also explains the graphical and visual representation of data. The course describes the median as the centre of the dataset as well. The centre is the point where approximately half of the data points are concentrated.

Next, the course describes the spread of the data and how it is measured. The course describes a gap as a relatively large unpopulated data range between two consecutive data points. You will also be introduced to clusters which are a group of data points that are close together. You will learn how to identify clusters without any gaps. An outlier is a point usually in the upper or lower end of a dataset, separated from other data points by a gap. The course explains how an outlier is used with a dataset. There are many shapes of distributions that occur frequently. In this course, you will understand how a shape is classified into categories. This course goes further in highlighting how shapes in a data set do not have a unifying concept for interpretation. You will get to know how the features of a shape in a dataset is just the reflection of the varying relative frequencies over the data range.

The course further examines by examining the various tools of data visualization which is one of the two main ways of condensing data sets and creating consumable results. You will be taken through the several advantages of using metrics as a method of data interpretation. You will be taken through the decision making process when interpreting a chart. You will study the two important metrics that are used to measure the centre of the dataset which are the mean and the median. The course goes on to explain in more details the meaning of mean and median of a data set. You will study in great detail how two datasets can have an equal measure of central tendency and how this does not imply that the datasets are the same. You will be taken through steps on how to measure the amount of “variability” associated with a particular set of data. You will learn about standard deviation which is the most used measure of dispersion. You will also learn to work with mean absolute deviation which is defined as the median of the absolute deviations from the Median of the data. Start this course today to master the major concepts and tools for collecting, analyzing, and drawing conclusions from data.