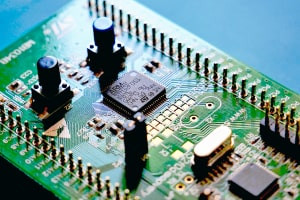 Learn about the programming, architecture and physical interfacing of embedded systems in this free online course.

The unique feature of a microcontroller is that it is a compressed microcomputer. This course introduces you particularly to the elements and working principles of the MSP430 microcontrollers. This is a mixed-signal microcontroller from Texas Instruments. It was initially introduced in Europe in 1993 and the rest of the world in 1997. MSP is an abbreviation for Mixed Signal Processor, and this is to indicate that the microcontroller has a CPU, another digital building block, and support for analogue circuits. The MSP430 has more than 500 different microcontrollers, and these vary in their capabilities, kind of hardware support, amount of memory, physical footprint, small chip, big chip, etc. We will explain the two most important features of the MSP43062x53 and teach you how to operate an MSP430 circuit with the help of a lemon battery. You make the battery out of lemons and two electrodes made of copper and zinc. You will experiment with four batteries, each producing 0.9 volts. So, roughly the voltage is 3.6 volts, suitable for powering an MSP430 circuit.

Next, you will study the MSP430 series memory architecture and map focusing on the G2553 microcontroller. Analyze the RAM of this microcontroller, which stores variables and stacks on the G255 series. They discover the 16 registers of the CPU of the MSP430, emphasising four special purpose registers: program counter, stack pointer, status register, and constant generator. Consider the various ways of programming the MSP430. Write programs and download them in the memory of the evaluation kit of the MSP430 lunchbox. Explore how to interpret warning messages, edit and fix errors after writing and downloading programs onto the lunchbox. In this section, we will consider three options. The Spy-Bi-Wire, JTG Debugger, and UART/USB Bootloader mechanisms. We will show you the physical interfacing of the MSP430 microcontroller and the various input and output devices associated with the device. We will also highlight how a user can interact and provide input to the microcontroller.

Finally, we will review the two kinds of input devices, human and environmental inputs. Understand how to connect the various switches to the microcontroller and handle a large number of switches. We will explain the LED concept, controls, and increases in the current, and how to connect LEDs in various ways. We will discuss the RGB LED and the seven-segment displays of the LED. Investigate the different forms of driving LEDs in 2 modes: low side driving and high side driving. Learning about the MSP430 microcontroller will give you the necessary skills and expertise to design, manufacture and manage these devices. This online course is unique and has a hands-on approach for learning to operate a significant hardware component. So, why wait? Start this course today.

Introduction to the MSP430 Architecture