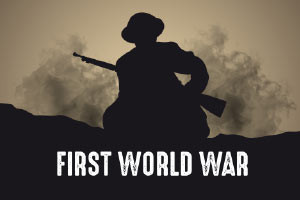 Learn why Britain, France, and Russia fought against Germany and Austro-Hungary in World War 1, with this free course.

Publisher: Khan Academy
This free online course on world history will teach you about World War 1 and its aftermath. World War 1 resulted not only in the death of millions of soldiers and civilians but also in the political collapse of European empires and the beginning of the rise of America as a world power. In this course you will learn about the political alliances between countries in Europe and how they were pitted against Germany and Austro-Hungary.
Start Course Now

This course will begin by discussing the political alliances that formed before World War 1. You will learn that Australia, Canada, and India were all part of the British Empire before the war began. You will look into important events such as the assassination of Archduke Franz Ferdinand that led to the outbreak of the war. You will also learn that Libya was part of the Italian empire at the start of World War 1 and that Italy fought on the side of Britain and France.

You will then look into the battles on the Western and Eastern fronts that decided the outcome of the war. This course will also discuss the post-war settlements at Versailles that shaped world politics for decades to come. You will study the different treaties such as the Treaty of London in 1839, the Dual Alliance Treaty in 1879, the Franco-Russian Military Convention in 1892, and the Entente Cordial of 1904.

The battles of the First World War on the Western and Eastern fronts were devastating. By the end of this course you will have a much better understanding of how WW1 started and how the Treaty of Versailles concluded it. You will also have learned about some really interesting events of the post-war negotiations between the Allied Powers and Germany, and how Germany was punished for initiating the war. This is important world history, which you can learn today.

Module 1: World War 1 And Its Aftermath