Diploma in Virtual Reality and Psychophysics 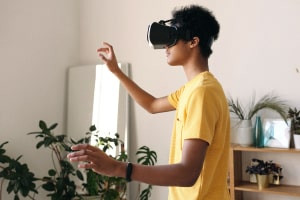 Learn about psychophysics in an iterative VR development process & how to measure experience in this free online course.

Publisher: NPTEL
Do you think exposing people to VR will help with treatment in psychotherapy? This course explores general methods for designing VR experiments involving human subjects and includes specific psychophysics methods. The elements of psychophysics, measuring VR experience, the scale for experience, sensation and perception are all illustrated. Learn psychophysical perception of depth and motion with fundamental concepts from maths and physics.
Start Course Now

Psychophysics relates perceptual phenomena to the original stimuli, making it crucial for understanding Virtual Reality (VR). This course provides an in-depth knowledge of exciting aspects of immersive VR environments that impact how we examine perception in terms of space, movement and tighter control over the visual scene. Some laws define relations between actual experiences and mental representations such as sensations or feelings. The theories of psychophysics offer an interpretation of these empirical relations and suggest neural mechanisms that give rise to experimental results. Discover the concept of psychophysics, its laws, elements and how to measure the VR experience. In the scientific study of visual perception, a researcher is concerned with the perception of stimuli. Here, VR provides both benefits and limitations relative to real life. We will investigate the psychophysics of visual perception. These include graphs of the psychophysical dimension of light, gamma encoding and gamma correction.

Depth perception is the ability to see objects in three dimensions (including length, width and depth) and judge how far away an object is. You generally need to have a binocular (two-eyed) vision for accurate depth perception. Study the psychophysical perception of depth and motion. Understand the concept of limiting resolution and tracking methods used to capture user motions in the physical world. Frame rate is the frequency at which consecutive images called ‘frames’ appear on display. The term applies equally to film and video cameras, computer graphics and motion capture systems. This course will introduce fundamental concepts from maths and physics, including velocities, accelerations and the movement of rigid bodies. You will learn about the number of frame rates that are appropriate for a motion picture. We will show you the problems with display and the perception of stationary and smooth motion in VR.

Lastly, we study the important concepts for VR and ‘augmented reality’ (AR), particularly the principles of perception. Kalman filters are used to optimally estimate the variables of interest when we can’t measure them directly but an indirect measurement is available. They are also used to find the best estimate of states by combining measurements from various sensors. We present the concepts of Kalman filters and extended Kalman filters for human motion tracking. There are many challenges in VR and AR technology. We explore these and the ‘simultaneous localisation and mapping’ (SLAM) algorithm and explain how you can use it to track set points through successive camera frames to triangulate a 3D position. This course benefits those longing to understand psychophysics in an iterative VR development process. A background in computer science, physics, neuroscience and psychology would be helpful coming into this course since this knowledge is required beforehand. Are you interested in psychophysics and how it relates to VR? Start this course now.

Psychophysical Perception of Depth and Motion

Important Concept for VR and AR