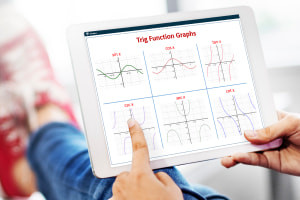 This free online course describes the graphs for trigonometric functions, as well as how to plot polar coordinates.

Publisher: ADU
This maths course walks you through important trigonometry topics. You will learn how to find the measurement of an angle and analyze graphs of trigonometric functions. It will also teach you how to solve for the inverse sine function and many other trigonometric concepts. Register now and improve your skills in trig today.
Start Course Now

This is the second in a series of trigonometry for general studies courses. Trig is one of the most important mathematical relationships. Triangles do not seem complex, but the application of triangles in mathematics has vital importance, especially where precise distance measurements are needed like in aviation. This course has been broken down into concise procedures to make your learning journey easy, detailed and interesting. It kicks off by introducing you to various trigonometric identities that are used to solve common problems. Trigonometric identities are useful whenever trig functions are involved in an expression or an equation. There are various distinct identities involving the length as well as the angle of a triangle. A trigonometric identity is true for every possible value of the input variable on which it is defined. This course outlines the formulas for the basic identities and proceeds to show you how to prove for identities.

Furthermore, the course discusses the graphs for the six trigonometric functions. For each graph, you consider period, amplitude, frequency, domain and range. The material illustrates in detail the application of the laws of sine and cosine. Learn how to solve for the missing lengths and angle measures of a triangle. In rectangular coordinates: to locate a point, we move so many units left or right, and so many units up or down. When working in polar coordinates, we would often stop to think how far do we have to move from the pole, and in which direction? The material helps you plot points accurately on a polar coordinate system and illustrates how to convert from rectangular to polar coordinates and vice versa. Register now and start studying the rules, theories and applications of trigonometry today.