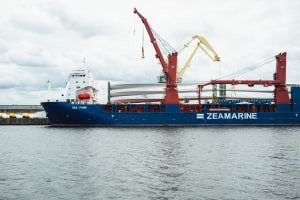 Learn about effective methods for stowage handling of general and deck cargo on board ships in this free online course.

Publisher: ADU
Ship Stowage Handling - General and Deck Cargo is a free online course that offers an in-depth guide to gain an understanding of the regulations as well as the strategies for proper handling and stowage of general and deck cargoes. Learn about multipurpose ships, Ro-Ro operations, and the IMO Code of Safe Practice for Ships Carrying Timber Deck Cargoes. Register for this course from Alison today and begin your next learning journey.
Start Course Now

Ship cargoes have continuously witnessed an increase in variety as a result of acceptance in the method and mode of cargo carriage by maritime vessels. This increase in variety resulted in the advent of codes and different techniques for the proper ship handling stowage of different types of cargoes. These were set up to prevent damage before, during, as well as after carriage onboard vessels from their ports of origin, through transit, and to their ports of destination. The packaging of random household items like clothes, furniture, alongside machinery of different kinds necessitated the need for general cargo ships to transport them. Such a variety of items require adaptable functions in carrying them because of their peculiarities of being unusual cargo types for maritime shippers. Also, they require different special features, equipment, along with onboard gears for loading/unloading, only seen on versatile general cargo ships that carry cargoes from both big and small ports. This could prove to be impossible for most types of ships. This course analyzes the need for specialized cargo ships by explaining the methods and modes of general cargo carriage for different cargo types alongside deck cargoes.

Ship Stowage Handling - General and Deck Cargo is a free online course that offers an understanding of the procedures, strategies, and regulations of stowing general cargoes. The course also analyzes deck cargoes alongside their distinct elements that are relevant to ship stowage. It also offers a basic understanding of handling stowed general and deck cargoes onboard ships for effective sea transport. This course covers aspects of general cargoes relevant to their special characteristics of stowage and handling of different cargo types onboard ships including general cargo loading, multipurpose ships, Ro-Ro operations, as well as carriage procedures. The course also covers aspects of deck cargoes including the battening down of hatch covers, unobstructed view from navigating bridge. This course also explains the IMO code of safe practice that regulates the proper carriage, stowage, and handling of deck cargoes on board ships. Ship Stowage Handling - General and Deck Cargo describes many measures to be observed in undertaking procedures for ensuring safe maximum possible load carriage on ship decks. The importance of providing safe access to essential equipment and spaces on cargo ships are also discussed in this course.

This course from Alison aims to equip learners with proper knowledge of stowage handling of deck cargoes and various types of cargoes onboard general cargo ships for carriage. This consists of the elements bordering the constructional features of general cargo vessels alongside features of various types of multipurpose ships. The course will also take you through an overture of general cargo loading, including aspects in between carriage and stowage which are necessary for transporting cargoes on board ships. Important aspects of deck cargo covered by the course shall expose learners to all modes and precautions necessary for achieving the maximum permissible cargo load onboard ships. Aspects of general cargo covered in the course will help professionals ensure that the overall stability of ships is maintained all through voyages by stowing cargo properly. The course will be of significant interest to students, logistic entrepreneurs, researchers, marine operations managers, marine engineers, and anyone seeking to learn about the stowage and handling of general and deck cargoes on board ships. Register for this free online course from Alison today to improve your understanding of ship stowage handling of general and deck cargoes.