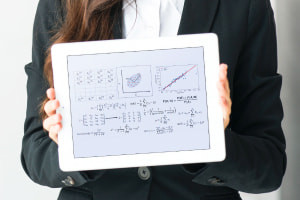 Learn the maths required for data science and analytics and gain an advantage in business in this free online course.

Publisher: Ermin Dedic
If your goal is to be a data professional (data scientist, data analyst, business analyst, data engineer), then some level of math understanding is an absolute must. This course covers the fundamental linear algebra, probability, and statistics relevant to applying maths in data science. This course is not like the math of your past, abstract and useless for the real world. Learn math that can help you shape the world.
Start Course Now

In the two remaining topics for linear algebra, you will explore properties of vector spaces (i.e., a basis for a vector space, linear combinations and span, linear independence, and the dimension of vector and subspaces) and see how to apply the previous knowledge via least-squares approximation. The next module begins by introducing you to probability. You will first understand the concept of a probability model and its axioms before exploring simple counting. You will then learn to think about and solve simple discrete probability problems, including conditional Bayes problems.

Afterward, you will study a few new concepts, random variables, probability mass function, expectation, and joint probability mass functions. You will then advance to working with continuous variables and working out probabilities for more than one variable at a time. Finally, you will comprehend how to apply statistical inference to obtain insights. Data Science is one of the sexiest fields of the 21st century. Since the start of the century, organizations have been keeping larger volumes of data, updating it more frequently, and using a wider variety of it (not just numbers but texts, tweets, audio, video, image, and more). The world needs you to take the massive amount of raw facts and work with them to produce actionable insights. Be insightful by enrolling today!

Probability and Statistics for Data Science

By the end of the course, you will be able to: