Learn about the laws and terminologies of electrical components of the marine environment from this free online course.

Engineering & Construction
Free Course
Electricity Laws and Circuits of Marine Electrical is a free online course that teaches the laws, terminologies, and characteristics of the electrical components of the marine environment. This course also discusses the different types and operational computation of circuits as well as the concept of electromagnetism. Register for this course today and enhance your knowledge of the electricity laws and circuits of marine electrical systems.
Start Course Now 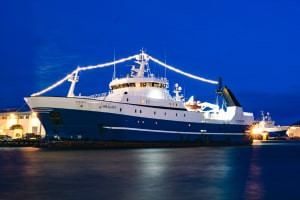 This course, Marine Electrical - Electricity Laws and Circuits, begins with an analysis of Ohm's law as well as the voltage, current, and resistance in the relationship that gives rise to the law. You will learn about the series connections of power source, resistances, inductances, and capacitors along with the effects of such connections. You will learn about power, its SI unit, and how it relates to the rate of work and energy. This course also illustrates potential dividers and their use in electrical circuits. You will be taken through the characteristics of electric current flow in parallel circuits, alongside voltage and resistance quantities. The course outlines the effects and limitations of Ohm's law as well as the series-parallel connections of electric circuits. You will learn about Kirchhoff's Current Law (KCL) relating complex circuits with different power sources and branches that cannot be solved with Ohm's law. In this course, Kirchhoff's Voltage Law and its application to circuits with voltage supply will also be covered. This course discusses the basic concept, units of measures measurement, and the types of electric currents. The course analyses the direction, source in addition to the comparison of the direct and the alternating current. You will also learn about the basic concepts, properties, and effects of a magnetic field on a conductor in electromagnetism.

This free online course on Marine Electricity Laws and Circuits provides an understanding of Electromotive force (EMF) generation and Faraday's laws along with the methods of producing Induced EMF. By taking this course, you will study the practical AC generator in addition to the quantity of the instantaneous value of induced EMF. You will also examine the frequency of EMF induced in a generator and the formula used to determine the magnitude of induced EMF. You will study the concepts used in waveform and the sinusoidal variation of EMF as well as the step-by-step process of calculating the average values of the sinusoidal current. You will also study the Root Mean Square (RMS) value of an alternating current. You will study the concepts of phasors representation, addition, subtraction, and the J operator. Lastly, you will learn about the alternating current circuits with resistors along with the power in a resistive circuit. This course will be of significant interest to students, researchers, marine engineers, environmentalists, and anyone with an interest in the electricity of the marine environment. Register for this course today and begin your next learning journey!