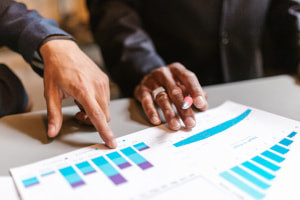 Unpack the effects of the natural business cycle, economic inflation and unemployment in this free business course.

Publisher: Saylor Academy
This course on macroeconomic inflation and unemployment explores the economic business cycle in both the short-term and long-run. It covers the concept of aggregate demand (AD), recessionary and inflationary gaps, and long-run macroeconomic equilibrium. By the end of the material, you will be able to describe and understand the full economic business cycle.
Start Course Now

You will look at the nature, causes and characteristics of two major economic problems: severe unemployment and inflation. Grapple with the concept of aggregate demand and how it is derived from all four sources of demand (consumption, investment, government spending and net exports). The course explains the factors that cause the AD curve to shift and discusses the two main types of equilibria in macroeconomics: short-run and long-run. Then study a macroeconomics analysis of when wages and other prices respond to economic conditions and when they don't. An elaboration on the intersection of the economy’s AD and short-run aggregate supply curves to determine equilibrium real GDP (gross domestic product) and price level in the short run is included. The course also covers the concepts of recessionary and inflationary gaps and how to restore long-run macroeconomic equilibrium.