English for Thai and Russian Speakers: Alphabet P to T 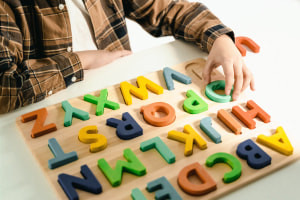 Improve your ability to pronounce, read and write English words beginning with P to T with this free online course.

Publisher: Teacher Vlad
Did you know that the accent we put on certain syllables and words when speaking English is called the ‘stress’ or ‘emphasis’? Emphasis and sentence stress are essential factors in speaking and listening comprehension in English. This course explains the letter functions in written language and accents in spoken language. Discover how to improve your English pronunciation, reading, and writing skills of the letters P to T by signing up for free.
Start Course Now

English is often considered one of the simplest languages to learn. To create grammatically correct English sentences, you only need to learn a few simple principles that are easy to comprehend, memorize, and implement. This course explains the English alphabet letters P to T. You will explore the phonics used to sound out letters and words plus study several essential principles of English grammar.

First, you'll study the letter P, its name and sound, as well as some words that include it such as picture, pie, plant, and price. After that, you'll come across the letter Q, which has two distinct sounds heard in words like question and queue. In addition, you will explore the structure of the past simple tense of regular verbs. We will also illustrate the forms of irregular verbs and the possessive case. Subsequently, you will study how the term 'there' can be used as part of the construction or indicate a distance from us. Then you'll come to know the name and the three characteristic sounds produced by the letter R in English words.

The course then moves on to 'S' and shows how to pronounce it in two different ways in words like snow and shoes. Finally, the phonetic representation of the letter T is presented, along with new words such as temple, tea, thin, and this, in which different sounds of it are distinguished. You'll also explore the differences between the pronouns 'these' and 'those' and their correct use to point something nearby or far away. English has emerged as the primary language of international communication and is the most widely spoken second language. Take a significant step toward becoming one of the millions of individuals worldwide with different languages and cultural backgrounds who use English to interact in person or virtually.

The material has Russian and Thai subtitles and transcriptions so native speakers of these languages can learn English more easily.

Learning and Practicing the Alphabets P to T