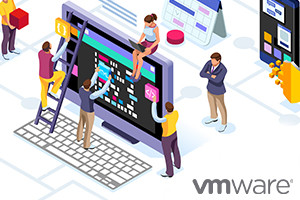 Learn about the virtualization and deployment processes of the VMware vSphere 6.0 in this free online course.

Publisher: Workforce Academy Partnership
This free online course on the virtualization and deployment of VMware vSphere 6.0 will give you a comprehensive guide on the methodology of VMware and the key features of this version of vSphere. You will learn all about the two types of the hypervisor and their functions in a virtual machine as well as how to install the vSphere hypervisor (otherwise known as the ESXi), and the fundamental differences between the Windows and Linux commands.
Start Course Now

Level-up your VMWare skills with this free online course on the virtualization and deployment of VMware vSphere 6.0. This in-depth course kicks off with the virtualization processes of VMware 6.0 and highlights the various updates made on the previous versions of VMware. You will then learn about the software-defined data centre (SDDC) along with how it simplifies data management along with the functions of type 1 and type 2 hypervisors (ESXi hosts) and the minimum physical hardware requirements for the installation of the ESXi hosts. Some other critical base knowledge is then covered including the different versions of VMware ESXi 6.0, functions of the VMware Horizon FLEX in providing flexibility to IT users while maintaining security and compliance, VMware Workstation Pro 12 and the functionality of the VMware Fusion 8 in VMware vSphere 6.0.

Have you ever wondered about using the direct console user interface (DCUI) to locally configure ESXi 6.0? This vSphere 6.0 course comprehensively describes this and then moves on to discuss how to work with the vSphere 6.0 ESXi image builder Command-Line Interface (CLI), the configuration process of DNS settings in VMware systems, the concept of network time protocol (NTP version 4), and how to achieve proper time synchronization. This provides an ideal platform for you to study the VMWare administrative tools, functions of the vSphere command-line interface (vCLI) in ESXi management, the Windows-based Secured Copy program (WinSCP) responsible for copying files between ESXi hosts and the processes involved in licensing vCenter Server 6.0 in VMware 6.0. The course finishes with the analysis and discussion of the various kinds of switches at your disposal including Standard Virtual Switches (vSS), vSphere Distributed Switch (vDS), 3rd party distributed switches, Cisco Nexus 1000v virtual switch, Nexus 1000v, IBM system networking distributed virtual switch 5000v and the various storage terms and their respective functions.

This VMWare vSphere 6.0 course is designed to equip you with practical knowledge of the configuration of storage in VMware 6.0 and broad themes also to be covered are being able to distinguish between the Storage Area Network (SAN) and Network Attached Storage (NAS) in vSphere, how multipathing with fibre channel works, and the characteristics of the vSphere virtual volumes (VVols). This course is aimed at students, IT researchers and -enthusiasts and professionals working with or interested in VMware administration with a specific focus on the virtualization and deployment of VMWare vSphere 6.0.