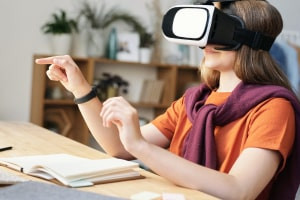 Learn about the basic concepts of creating an interactive virtual reality (VR) experience in this free online course.

Publisher: NPTEL
This free online course will teach you about virtual reality (VR) and how to design a better VR system by learning a variety of engineering concepts (hardware, software, perception) that are used in the current VR systems. This course will also explore the Virtual World Generator (VWG), which maintains the geometry and physics of the virtual world. You will be shown the concept of light and optics systems and their relevance to VR.
Start Course Now

Virtual Reality (VR) technology is evolving rapidly, making it counterproductive to define VR in terms of specific devices that might be out of favour in a year or two. This free online course will teach you what VR actually means, in a way that captures the most crucial aspects notwithstanding the constantly evolving technologies. This course will also look into how we have arrived at VR technology as it exists today. The history of VR will be discussed with a particular focus on when VR came about and we will discuss the fact that certain facets of VR have been with us for tens of thousands of years. The first step to understanding how VR works is to know what constitutes the whole VR system. It is tempting to think of it as being merely the hardware components, such as computers, headsets and controllers. This would be woefully incomplete. Learners will gain an understanding of an overview of VR systems from hardware to software and then to human perception. Furthermore, learners will be introduced to Virtual World Generator (VWG), which maintains the geometry and physics of the virtual world. The geometry aspect of VR, which is needed to make models and move them around will be covered in this course. Models may include the walls of the house, chairs, clouds in the sky, the avatar of the user and so on.

In addition to this, knowing how light travels through the real world is key to understanding VR. One of the main benefits of this is the interface between visual displays and our eyes. Light is emitted from displays and arrives on our retinas in a way that convincingly reproduces how light passes through a normal vision in the physical world. Another reason to study light propagation is the construction of virtual worlds. This course will model the physics of light propagation through virtual worlds which describes what should be rendered on the visual display. Learners will gain an understanding of the basic physical properties of light, including its interaction with materials and its spectral properties. Finally, this course will create ideal models of how lenses work, then shows many ways that lens behavior deviates from the ideal model, thereby degrading VR experiences. Learners will also be introduced to the concept of the human eye as an optical system of lenses. This course is suitable for learners who have and have never experienced VR. This course is also important for learners who wish to evaluate existing VR applications, design, test and implement their own VR experiences.