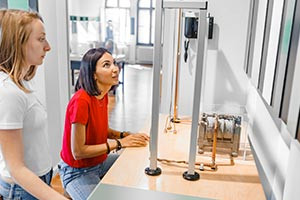 This free online course describes the various standardized units of measurements, as well as the mechanics of motion.

Publisher: ADU
This course introduces you to the fundamental aspects of physics. Units of measurements are important because without standardized units, it would be extremely difficult for scientists to express and compare measured values in a meaningful way. You will learn about the importance of units of measurements and the study of motion.
Start Course Now

This course covers two fundamental aspects of physics: measurement and motion. A unit of measurement is a standardized quantity of physical property used as a factor to express occurring quantities of that property. Units of measurement were among the earliest tools invented by humans. The definition, agreement, and practical use of units of measurement have played a crucial role in human endeavor from early ages up to the present. They are important because without them, it would be extremely difficult for scientists to express and compare measured values in a meaningful way. The measurements of physical quantities are expressed in terms of units, which are standardized values. For example, the length of a race, which is a physical quantity, can be expressed in metres (for sprinters) or kilometres (for long-distance runners). You will learn about unit conversions and the guidelines for good graphing techniques.

The course then introduces you to vector and scalar quantities. Mathematics and science developed as ways of understanding and describing the world around us. A lot of mathematical quantities are used in physics to explain concepts clearly, including force, speed, velocity, and work. These are often described as being scalar or vector quantities. Scalar and vector quantities are differentiated depending on their definition. You will also learn about the resultant of two vectors that are collinear and at right angles. Some numerical statements are exact: for example, 2 + 2 = 4. However, all measurements have some degree of uncertainty that may come from a variety of sources. The process of evaluating this uncertainty associated with a measurement result is called uncertainty analysis or error analysis. You will learn about the different types of errors and how to measure them.

Then, you will be introduced to the study of motion. In physics, motion is the phenomenon in which an object changes its position over time. Motion is mathematically described in terms of displacement, distance, velocity, acceleration, speed, and time. The motion of a body or object is observed by attaching a frame of reference to an observer. Measuring the change in position of the body relative to that frame with a change in time. The branch of physics describing the motion of objects without reference to its cause is kinematics. The branch studying forces and their effect on motion is known as dynamics. You will learn about different aspects of motion and its graphical analysis. Next, the course analyzes acceleration. An often confused quantity, acceleration has a much different meaning from what is implied by sports announcers and other people. You will learn about the different types of acceleration and how to calculate them. So, register for this course today and begin your next learning journey in physics!

The Mathematics of Physics

The Study of Motion