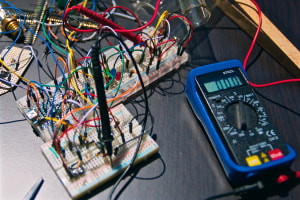 Learn about basic electricity concept, its laws, theorems and how DC circuit works in this free online course

Publisher: Graham Van Brunt
In this free online course, you will be introduced to the history of electricity and how early scientists came up with laws and theorems such as Ohm’s law, Norton’s theorem and more. This course also examines the basic concepts of the DC circuit and how it is applied in modern-day life. You'll learn about electrical components such as resistors and capacitors, among others as well as how to calculate voltage and current across DC circuits.
Start Course Now

The basic concepts of electricity, dating back to over two thousand years, were unveiled by early scientists. Over the years, scientists have unlocked the nifty mystery in electricity by studying and analyzing the concepts of electricity using various scientific procedures or methods. Electricity has contributed immensely to the birth of civilization. Electrical energy is a common form of energy that can be found in large amounts in places like power stations and in little amounts in consumer devices like the calculator. Every home-based electronics and electronic device has the basic concept of electricity in direct current (commonly known as DC), which is essentially the movement of electrons through conductive materials. This course explores the basic fundamentals of a direct current circuit. You will be shown the laws and theorems in DC circuits formulated by early scientists. Upon that, you will be introduced to the nature of electricity and equations to facilitate your understanding of electricity.

The capacitor is an electrical component that stores energy in an electric field. Well, why does a capacitor store energy and not charge? You'll discover the reason in this course and how capacitors are arranged across a circuit. Conversely, magnets are materials that generate a magnetic field. Though invisible, they have forces that can pull ferromagnetic materials. However, the phenomenon associated with magnetic fields that arise from the motion of electric charges is known as 'Magnetism'. This course will in detail explore magnetism including various equations used in calculation pertaining to electromagnetism in DC circuits such as magnetic flux, reluctance and permeability of a material. Furthermore, you will be introduced to Faraday’s law of induction and inductance. An understanding of basic math and linear equations is required to take the course. This course is for learners willing to understand the basic concepts of DC circuits of electricity. If you find yourself, driven by curiosity, being interested in electricity, enroll and start this course today.

DC Circuits and Its Components

Upon completion of this course, you should be able to: