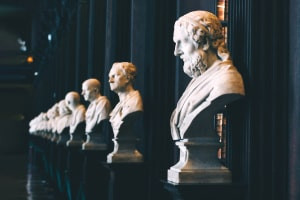 Meet the early political philosophers who laid the foundations for modern political theory in this free online course.

Publisher: NPTEL
This free online course offers in-depth insight into the early political philosophers. We examine the work of Socrates and Plato, beginning with Plato’s vision of the ‘ideal state’. We then unravel Aristotle’s political ideas, starting with ethics and virtue, before exploring his theories regarding citizenship, slavery and constitutions. While they lived thousands of years ago, these towering intellectual figures still loom over world history.
Start Course Now

Modern political concepts like freedom of speech, democracy, majority rule with minority rights and social justice are the legacy of early political philosophers, particularly the titanic figures of Plato and Aristotle. This course introduces you to early political philosophers, analyzes their work and illustrates their contemporary relevance. Plato, for instance, addressed ‘justice’ by rooting it in the harmony of existence within the individual’s soul. Such balance is mirrored in the relationship between the State’s three classes and Plato considered it vital to maintain order and a primary moral value intrinsically connected to other virtues such as temperance, wisdom and courage. Plato is found by some authors to be ‘utopian’ or even unrealistic but his ideas continue to guide modern political theory and resonate today.

We then move on to Aristotle, Plato’s student (and Alexander the Great’s tutor). For Aristotle, politics is a ‘master science’ that helps you live an ethical life and realise your full moral potential. This is only achieved in a ‘polity’, a virtuous community. Aristotle saw humanity as distinct from other species in terms of being rational and possessing language to communicate ideas. He believed that humans are neither beasts nor gods, though they share some attributes with both and questioned any transcendental or universal theory of ethics, morality or good. Though considered by some to be conservative and conventionalist, Aristotle is widely seen as a revolutionary thinker who influenced the history of political thought, particularly western tradition. Other Aristotelian themes include the economy, which Aristotle described as ‘the art of household management’, constitutions, citizenship and corruption.

Despite their eminence in the field of political thought, Plato and Aristotle have been criticized, often severely, by many authors. Aristotle himself severely questioned Plato’s ‘ideal state’ and deemed it ‘elitist’, doubting wisdom accessible solely to philosophers. Aristotle believed in the ‘wisdom of many’ but accepted the form of state described in Plato’s ‘Statesman and Laws’. Likewise, many scholars have critiqued Aristotle’s work, especially his defence of slavery and his support of women’s subordinate roles, which are anachronistic today. This course investigates these theories and discusses their role. This course is of particular interest to students specializing in philosophy or political science but it can help anyone who wants to understand why the world is run the way it is. These ancient ideas echo in the speeches and soundbites you hear today and we explain how they have survived the centuries.

From Socrates to Plato