Diploma in Ecology and Human Interaction with Nature 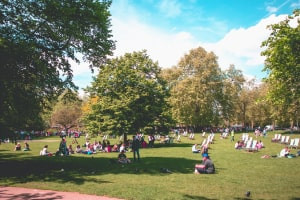 A free online course on how humanity has interacted with nature across history and our impact on the environment.

Publisher: NPTEL
Many believe that we are living in an era of ecological crisis. This free online course looks at how human societies have interacted with their natural environments across history and the impact they have had on these ecosystems. Understanding what has led up to this modern-day crisis will help create more sustainable solutions for a better future. This course will be helpful to anyone wanting to make a difference to the human-ecology dynamic.
Start Course Now

Many ecologists, anthropologists and philosophers agree that the solution to contemporary environmental and ecological problems does not lie in government legislation but in educating humanity and changing the way we think about and see Nature. You will start by learning how ‘dualism’ - or the idea that nature and society are separate from each other - started during the European Renaissance when a systematic fragmentation of the medieval world took place, and the whole western attitude towards the environment, knowledge, and learning was transformed. As you learn about these changes you will be introduced to the term ‘Cartesian anxiety’, in a place that became obsessed with understanding the world by modern scientific means. Next, you will study three different paradigms of human-environmental relations. The first paradigm is ‘Orientalism’, which expresses the idea that humans are the masters of Nature, and therefore Nature needs to be conquered, and which was prevalent during colonialism. Next is the paradigm of ‘paternalism’, which argues that nature needs to be protected. Finally, you will learn about the paradigm of ‘communalism', which brings nature and society back together.

Go on to understand more about religion from anthropologist Roy Rappaport and sociologist Emile Durkheim. One of the theories proposed by Rappaport is that religion is central to the continuing evolution of life and that one possible answer to the world’s crisis would be a religion founded on post-modern science grounded in ecology, rather than astronomy. After this, you will learn about the relationship that religious beliefs have had with nature over the centuries. Study the thinking of historian Lynn White, as he argues that Christianity and its belief that God commanded man to master the Earth, are partly to blame for the western attitude of mankind’s dominion over nature.

The next section of this free online course is about Asian religions, as you study how the Buddha saw nature and how he commanded his followers to respect the environment. You will read about ancient Hindu writings regarding sacred groves and respect for flora. Afterwards, you will learn about ecological ethics as you study three philosophical views of nature. The first is ‘deep ecology’, which describes intense ecological awareness. The second is ‘social ecology’, which claims that the environmental crisis is a result of the hierarchical organization of power and the authoritarian mentality rooted in the structures of our society. Thirdly, there is ‘ecofeminism’, which sees the oppression of women and the destruction of nature as one and the same. Finally, you will learn about traditional indigenous knowledge or the practical knowhow and wisdom native communities have accumulated over generations of interaction with their natural surroundings and how this knowledge can be used alongside scientific research to sustainably manage our natural resources. This course is ideal for those who are not only passionate about nature and want to make a difference but who also want to have a solid understanding of the religious and philosophical beliefs behind modern ecological theory.

• Define Cartesian anxiety
• Describe the ideas of Orientalism, paternalism and communalism
• Discuss the emergence of religion in human evolution
• Recall the role of Christianity in the ecological crisis
• Indicate conservation ethics in Buddhism
• Explain the views of Hinduism in nature conservation
• Recall environmental philosophies
• Explain the concept of deep ecology, social ecology and ecofeminism
• Outline the difference between indigenous knowledge and scientific knowledge
• Identify how indigenous knowledge is passed on
• Analyze the impact of indigenous knowledge on development projects
• Summarize the work entitled, 'An Ecological Journey'