Diploma in Aircraft Design and Configuration 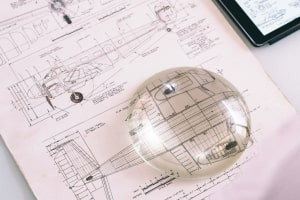 Publisher: NPTEL
This free online course discusses the categories of airliners and design trends for new model fabrication. You will consider the importance of natural laminar flow and the structural technologies and layout choices in design configurations. Also, you will discover how to carry out Initial Sizing by considering the mission profiles from historical data. Then, you will distinguish the aircraft 2-D and 3-D airfoil and wings configurations geometry.
Start Course Now

In this free online course, you will examine how aerospace engineers and aeronautical engineers fabricate aircraft that meet the market and operational requirements by first considering the economic impact and mission specificity of the aircraft configuration. You will see the technological developments that influence aircraft design feature specifications while acquainting yourself with the purpose of airworthiness regulations that ensure adherence to safety standards. The three phases of aircraft design and the conceptual, preliminary, and detailed design evolutionary processes will be elucidated. You will consider the concepts of initial sizing by adopting parameter values from user specifications and operational constraints for the estimation of the aircraft gross weight. Then, you will learn about the concept of the design spiral and how to develop an aircraft manufacturing template at the conceptual design phase, to prevent idea sterility and avoid the dearth of product knowledge in the long run. You will study the tools and techniques for requirements capture, while the house-of-quality-chart (HoQ) will be used to foretell the key customer attributes. The clausing 4-level house of the quality model and rough order of magnitude analysis will also be demonstrated.

Next, you will be shown the features of short-range, medium-range, and long-range airliners. Then, you will see a comparison between the design configurations used to classify airliners into the three groups based on the feature properties of the design model. You will get to understand the geometric properties of aircraft like fuselage sizing, powerplant, and wing settings, examining how these properties and other features of an aircraft can be adjusted via shrinking and stretching to construct new aircraft. The key design considerations for future airliners will include concepts for reduced drag, provision of natural laminar flow, and other trade-offs. The concepts will aid our discovery of the primary reasons for building an aircraft with better fuel economy and strut-based wings. The special features of a supersonic transport aircraft which includes Ogive shaped wings, fly-by-wire flight control systems, and drooping nose, will be covered in the lesson. Then, the precepts behind the wingtip devices such as spiroid-winglets and novel aircraft shapes such as Flying V and Airbus Maveric will be revealed.

Finally, the concepts of active laminar flow and innovative models for achieving and maintain natural laminar flow in an aircraft will be proposed. You will also get to know the various types and applications of military aircraft used for combat and surveillance. Aircraft configuration design will consider factors such as the payload, lifting surface arrangement, propulsion system selection, etc., while the key technologies and major layout assemblies of an aircraft will be elucidated. The concepts of wing sweep, canards, and flying wings and the countless advantages of applying these components during aircraft fabrication will be disclosed. The options for an aircraft layout configuration entail the conceptual shape, relative position, and functional characteristics of the components. The options for wing layout will include the high, low, and mid-wing configurations and the propulsion systems will comprise the tractor and pusher engines. Other layout selection models will consider the tailplane layout and landing gear types. You will be introduced to the OpenVSP parametric tool for enhanced model creation and geometry manipulations in conceptual design. Then, you will study refined sizing and how to estimate the design, engine, and weight parameters of an aircraft via the parameter equations and knowledge of the historical data. If you are interested in pursuing a career in aeronautical engineering or aerospace engineering, then this course has been designed specifically for you, to give you a boost in your career path. So why wait? Start this course today!

The Phases of Aircraft Design