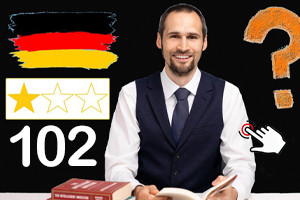 Learn to express yourself in German by studying its basic lexis and sentence structure with this free online course.

Publisher: Kevin Gründel
Contrary to mythical belief, did you know that German is one of the easiest languages to learn? Maybe you have been asking ‘what is the fastest and liveliest way to learn German?’. In this free online course, we will teach you the basic lexis and sentence structure of German in a fun manner to help you learn how to freely communicate in the native language of Beethoven and Mozart, the fathers of classical music. Start learning today.
Start Course Now

Did you know that English and German are both Germanic languages with close to 60% similar vocabulary? Both languages stem from an earlier form of German and they share many grammatical expressions and structures. Arguably, this makes German easy to learn for English speakers. In Europe, German (also known as ‘Deutsch’) is one of the most popular languages used for daily conversations, with over 120 million native speakers. It is also an official language in Austria, Belgium, Liechtenstein, Luxembourg and Switzerland. Again, it is noteworthy that German is the second most widely used scientific language. With over a hundred Nobel Prize wins by German inventors and innovators in Physics, Chemistry, Medicine and other fields, German is the language of many credible thinkers. This course is the second course in the ‘German Language for Beginners’ series. If you recently only started learning German, we recommend completing ‘German Language for Beginners 101’ before taking this course.

In this course, you will learn about the accusative case of German verbs, which are the most commonly used in the language. We will teach you how to distinguish the questions for the nominative, accusative and neutral genders of German verbs. In addition, you will consider the personal and possessive pronouns for making references to human and animal subjects in the language. We will examine the difference in the nominative and accusative endings of German adjectives. Then, we will explore how to identify the reflexive verbs (or ‘reflexive verben’) so that you can have a hitch-free dialogue in Deutsch. The German system of numbers will consider the ‘die Zahlen’, also known as the ‘regular numbers’, and the ‘ordinalzahlen’, which are the ordinal numbers. We will explain the terms for dates and times of the day, including the formal and informal ways of telling time in German.

Finally, we will delve deeper into time’s nuances, providing insight into the different periods within the day, days of the week and the months of the year. We will explain the two ways of expressing negation and provide an overview of the language's sentence structure. Like in English, you will learn about the ways or possibilities for implementing an action, known as the ‘modalverben’ in German. Similarly, we will dissect the ‘imperative’ and ‘der comparative’ to enable you to know how to qualify objects and compare them by size, weight, height and position. You will also be taught to answer simple questions like ‘who is it?’, ‘how do you feel?’ and ‘what did you see?’. By completing this course, you will be able to express yourself confidently in German. So why wait? Take this course now to become a German-speaking rock star.