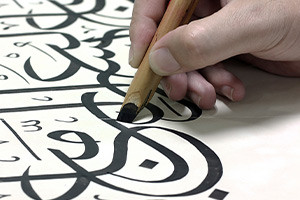 Master the second (Baa ب) and third letters (Taa ت) of the Arabic alphabet with this free online course.

Arabic letters can have four different forms corresponding to an initial, (middle), or final. You will learn how the letter Baa links to the letter before or after. The following section illustrates the third letter in the Arabic language, the letter Taa2. You will also explore the letter Taa2 with the short and long vowels, as well as Tanween. In addition, we will describe how the letter Taa2 varies depending on the position in the phrase.

The final section illustrates the notion of the letter bound Taa2. You will learn that it will always be at the end of a word, and it can have two sounds, English T or H. Also, we will explain the differences between Taa2 and Taa2 marbuta. So sign up for this course now and study the second and third letters of the Arabic alphabet.

Having completed the course, you will be able to