An Introduction to Peer to Peer Networking 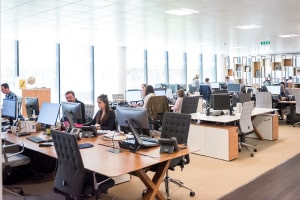 Lear about the concepts and architecture of peer to peer networks with this free online course.

Publisher: NPTEL
This course aims at answering the question of how nodes in a distributed network exchange information. It comprises several topics that focus on dynamic index updates, creating secure data communication using advanced encryption, distributed hash tables, and logarithmic partitioning. Examples will be provided to illustrate how data is passed from one node to another within the network.
Start Course Now

This introductory course on Peer-to-Peer networks aims at explaining how a peer-to-peer protocol delivers reliable data transfer services across unreliable transmission lines or networks. Unlike in a server client configuration, a peer-to-peer network allows network nodes to receive and also to share out services and resources from other nodes in the network. This includes meticulous verification and authenticity of the origin of data using certified private and public keys. You will discover how these keys ensures the network element’s authenticity and safeguards it from malicious hackers. The course then continues to explain how a voice channel is setup using the Session Initiation Protocol (SIP) based on a client’s IP address and port number. The differences between a Leaf node, Root node and a Bootstrap are explained and also their functions in a peer-to-peer network. The functions of the Finger table and the Distributed Hash table are illustrated using appropriate diagrams.

The next module goes on to describe the Logarithmic partitioning process as a means to quicken the process of the discovery and insertion of a new network node. You will explore how the node identifies other network elements by keeping a regularly updating its registry or address book. Use of the Certificate verification process, One-Time-Pins (OTP) and location related IP addressing to increase security and authenticity of data are highlighted. Query and Publish messages are used to explain the process of handshaking and redistribution of information in the Distributed Hash table configuration. A publish message comes about when a node wishes to enter a network and wants to alert other nodes of its existence. A query message comes in when the network node has been requested to provide information about its name and the location by another node i.e. Root node. Static and dynamic partitioning of node IDs in the node ID space is discussed by showing the advantages and disadvantages of each type in the performance of network processes.

While Peer-to-Peer systems have been used in many application domains, the concept was popularized by file-sharing systems in yesteryears by such music-sharing applications as Napster. The peer-to-peer crusade allowed millions of Internet users to join directly, form groups, and collaborate to form user-created search engines, file systems, and virtual supercomputers. The early Internet was more open than the present day, where two computers could have connected to the Internet by sending packets to each other without firewalls and other security restrictions. This is different from the web's broadcasting-like structure as it has developed over the past recent years. Structures like the USENET, a distributed messaging scheme that was often described as an early peer-to-peer design, was established. It was a system that enforces a decentralized model of control. On the other hand, news servers would communicate with one another as peers to propagate news articles over the whole group of network servers. The same idea applies to SMTP email in the sense that the main email-relaying network of mail transfer agents has a peer-to-peer character, only the endpoint connected to the client has a client-server relationship. Peer to peer technology is quickly taking centre stage. Don’t be left behind, start upgrading yourself with this course today!

An Introduction to Peer to Peer Networking

Free, Online An Introduction to Peer to Peer Networking Course