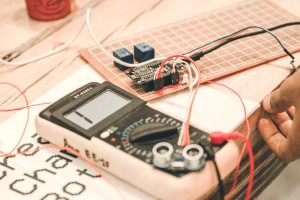 This free online course on the interconnection of electrical circuits and various theorems for circuit analysis.

In this course, you will learn about the interconnection of the electrical circuits, as well as mesh and nodal analysis of various electrical circuits. An introduction to network theorems, linearity properties, as well as the concept of duality, and the maximum power transfer theorem will also be covered in this course. Then, the course will teach you about the reciprocity theorem, compensation theorem, as well as the various ways to excite first-order circuits. You will also learn about singularity functions, and how to find the initial and final values of a second-order circuit.

Then in this course, you will learn about the properties of RLC circuits, the definition and properties of the Laplace transform, as well as carrying out inverse Laplace transforms. How to carry out circuit analysis using Laplace transform, the graphical approach to evaluating the convolution integral, as well as an introduction to a two-port network in a circuit will also be covered in this course. Then, the course will teach you about the concept of phasors and its application in AC circuit analysis, as well as an introduction to three-phase circuits and the phase sequence of three-phase voltages.

You will then learn about Mason's rule, and first-order differential equations, as well as the transfer function of multivariable systems, and the relationship between state equations and transfer functions. Lastly, the course will teach you about the characteristics equation from a differential equation, as well as the modelling of the mechanical and electrical system, and introduce you to the concept of rotational motion. Begin this course now to understand the fundamentals of electrical circuits and how to carry out various circuit analysis on electrical circuits.

Laplace Transform and its Application