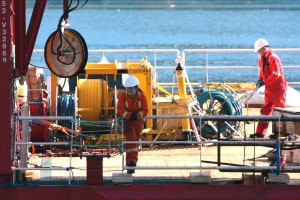 This free online course covers the structure of ILO conventions, the importance of maritime law and seaworthiness.

Publisher: ADU
This course introduces you to the International Labour Organization (ILO) conventions and maritime law and teaches you the ILO conventions and how it works. Discover how ILO integrates with the International Maritime Organization (IMO). We will touch briefly on the history of maritime and admiralty law. Learn about the United Nations Convention on the Law of Sea and UNCLOS Maritime Zones, the Carriage of Goods by Sea Act and ship seaworthiness.
Iniciar Curso Agora

Understand how the International Labour Organization (ILO) and the International Maritime Organization (IMO) work together to solve problems in this introductory course on ILO conventions and maritime law. At first, we teach you the ILO conventions, how ILO works, its structure, and how it works with IMO to resolve issues. It discusses maritime law and admiralty law and how to distinguish between the two. The course teaches you about the main focus of maritime law and the complexities of admiralty law. Examine the Jones Act and its focus on providing medical care and income benefits for injured seamen in the line of duty, along with their dependents. Next, we outline the Longshoreman and Harbour Workers Compensation Act, which provides similar help for maritime workers who are not classified as seamen. You will learn about the Carriage of Goods by Sea Act responsible for governing claims involving damage to cargo shipped by sea internationally. This course comprises two modules alongside various topics. We have broken these down using various media illustrations to give you a comprehensive understanding of maritime law, UNCLOS zones, and some sea acts.

This course then discusses the United Nations Convention on the Law of the Sea (UNCLOS) and defines the rights and responsibilities of nations concerning their use of the world's oceans. It identifies the various areas of the world's seas as divided into zones of jurisdiction by the UNCLOS. You will also learn about the maritime labour convention, which sets the minimum standards to ensure satisfactory conditions of employment for seafarers. We explain internal waters and how the baseline is measured, then teach you about territorial water. Discover how territorial waters can extend to a maximum of 12NM from the baseline. You will also learn about UNCLOS's unique status of Archipelagic waters due to their natural resources. Next, this course describes the exclusive economic zone (EEZ). You will recognize the coastal state's rights, jurisdiction, and duties within the exclusive economic zone (EEZ). In addition, you will learn about the international straits used for international navigation between one part of the high seas or an exclusive economic zone and the various duties of states bordering straits.

Furthermore, this course explains the tripartite nature of the MLC and its effects and highlights what the IMO conventions cover, such as; forced labour, freedom of association and protection of the right to organize, right to organize and collective bargaining. Analyze the freedom of the high sea and what it contains. You will learn about the involvement of the UNCLOS in marine pollution. The course describes the Carriage of Goods by Sea Act (COGSA) as a section of the United States code and how it governs the responsibilities and protections of shippers and carriers of cargo. It discusses the concept of seaworthiness and bills of lading with examples showing why you can see a ship as "not seaworthy". You will learn about some uncontrollable causes of loss. Also, it outlines some of the shipper's responsibilities. It further explains the burden of proof and highlights the compensable damages under COGSA. Finally, this course explains legal action, limits of maritime liability, and some circuit court admiralty cases on seaworthiness. This course will be of great interest to students, researchers, and anyone interested in maritime law. So, register for this course and start today!